We have been getting a lot of questions as to “Where in the World is Hurley” our beloved Golden Retriever. Well don’t fret, he is still around. He has been spending his summer back in Chesapeake with our son, Tyler.

I brought him up back in June for a bridal shoot with one of our first brides. But I found during that week long stay he was really out of place and was always looking for our son, his favorite person in the world. So I sent him home to enjoy swimming in the pool and hanging out with Tyler and his friends. I got to see him last night and today when I made a run back to Chesapeake for a meeting. 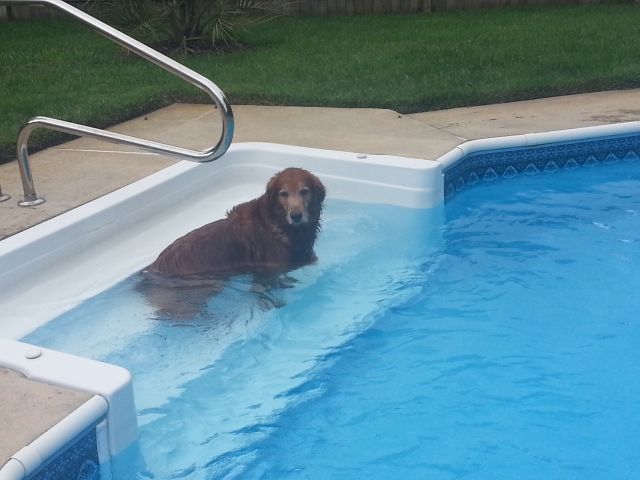 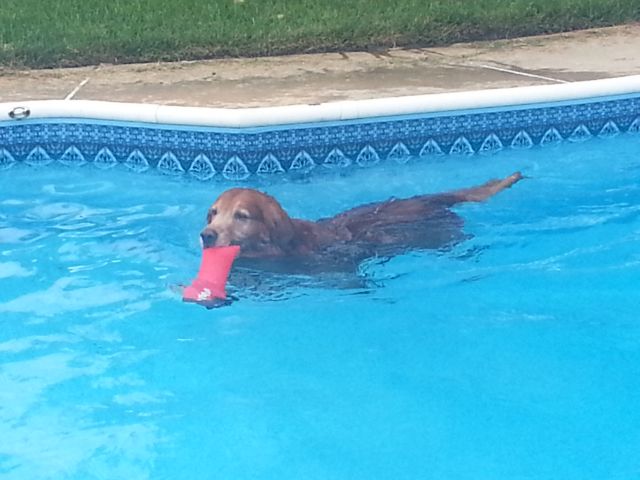 So don’t worry, he is doing great and will be back up some during the fall and winter months.

To see what we are up to at the plantation

See what Upcoming Events we have at the Plantation under our “Event Calendar” tab!

The Landscaping, Sidewalk, Hurley and an Incredible Find have arrived!

Saturday morning at 10am, a huge red Kenworth truck pulled into Belle Grove Plantation bearing lots of beautiful new plants! We also had 17 wonderful volunteers who gave of their time and worked hard in the heat to help us unload and plant 1/3 of the plants! We can’t begin to tell you how much we appreciate all our volunteers! We could have never done this alone!

Thank you to the following:

King George Board of Supervisors Ruby Brabo and her daughter Clara

Mrs. Veazey and her son Warren

Mrs. Durrette and her daughter Rachel

Mrs. Goodall and her friend Alex from Richmond

We had the following plants to arrive: 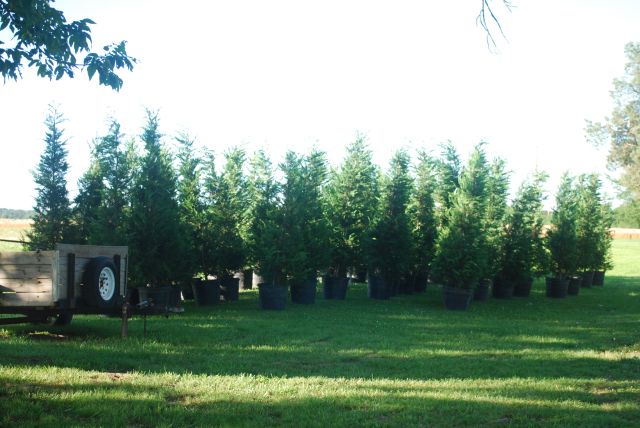 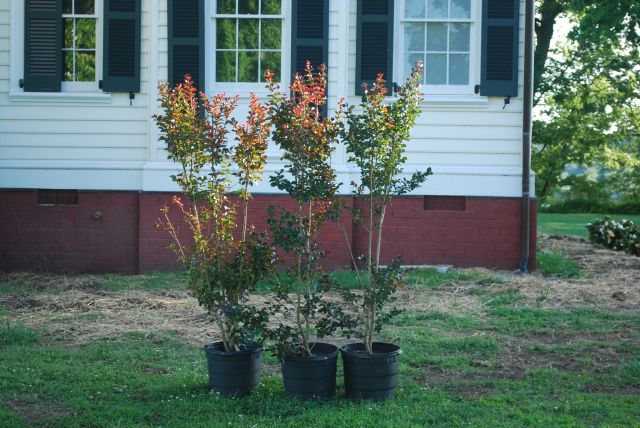 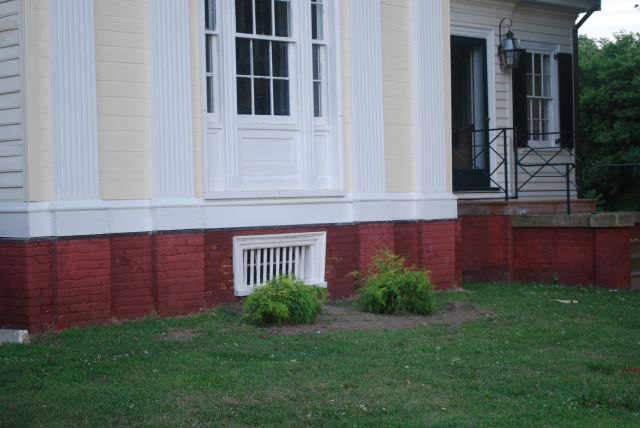 As we were digging holes, we were finding more artifacts! One find was more than we could have hoped for! Alex found two parts of a white plate and two pieces of green glass. As soon as I saw the green glass I knew it was from an old wine bottle. But you just couldn’t date it because it lacked markings. But the white plate looked really interesting! I held my breath and hoped until today. I ran to Ferry Farm to get it dated! Mara confirmed my wildest dream! It dates from 1740 to 1755! It is now the oldest pieces we have found on Belle Grove! And the date would have been when James Madison’s Grandmother was still here! Can you believe it?! James Madison’s Grandmother, Rebecca Catlett Conway Moore and his mother, Nelly Conway Madison could have held this plate!! It just blows your mind! 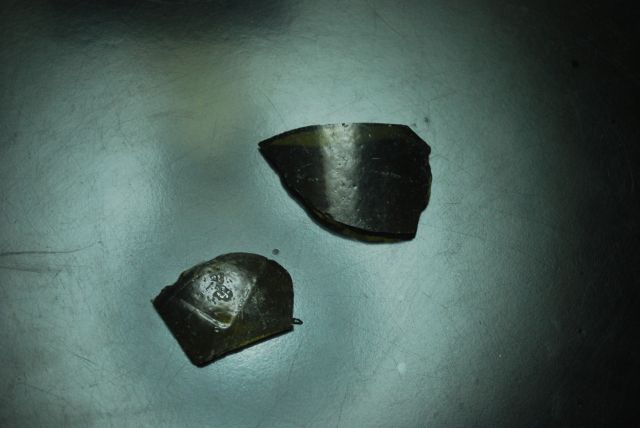 Green Glass from a Wine Bottle. Found in the same hole believed to be the same dates

While we were hard at work on the landscaping, we had a crew of hard working masons from Betts Masonry working hard on our sidewalks. You know that we have been pulling our brick from the Riverside to move to the front. Well Saturday we started seeing the fruit of our labors! We love this sidewalk! It should be done by Friday if we don’t get delayed by the weather! 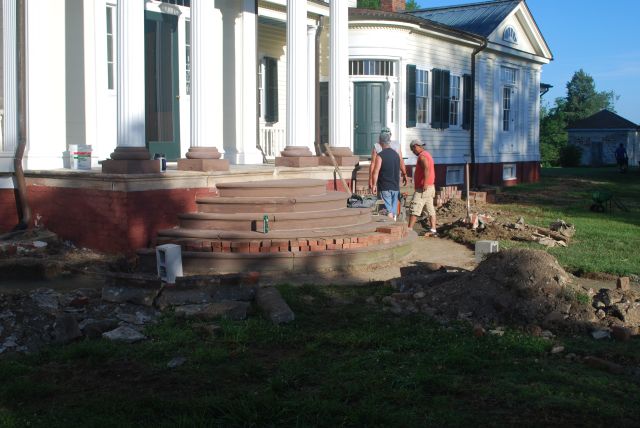 Getting Started on the Sidewalk

Getting Started on the Sidewalk 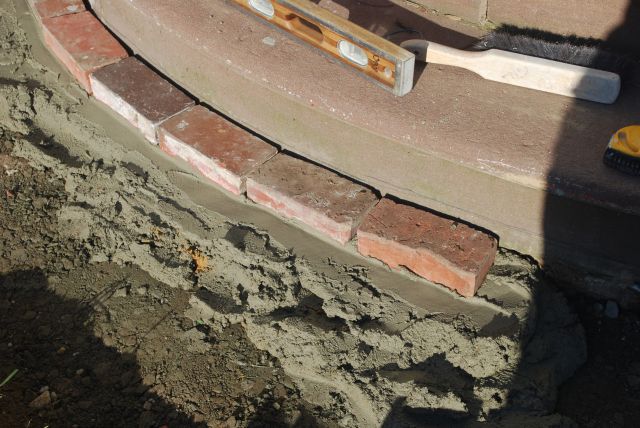 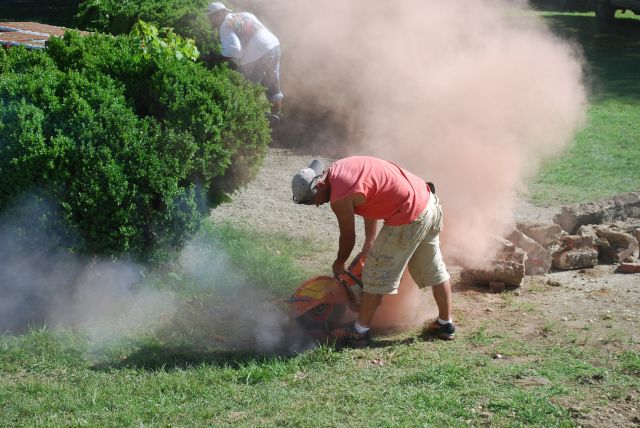 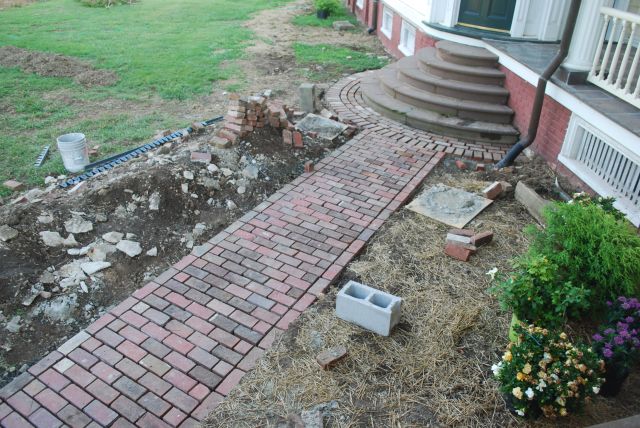 And I know we haven’t talked much about Hurley , our Official Plantation dog, because I have been at Belle Grove and he and Brett have been in Chesapeake. Well Hurley has arrived back at Belle Grove Plantation! He has a photo shoot on Tuesday with a soon to be bride. 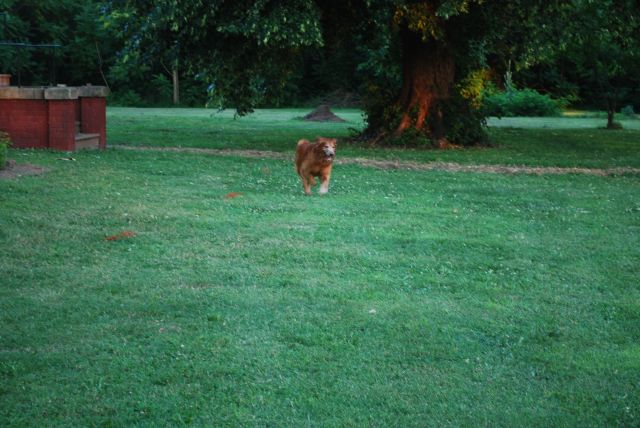 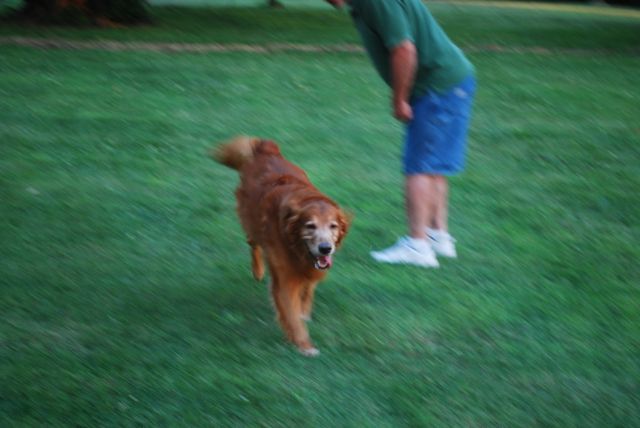 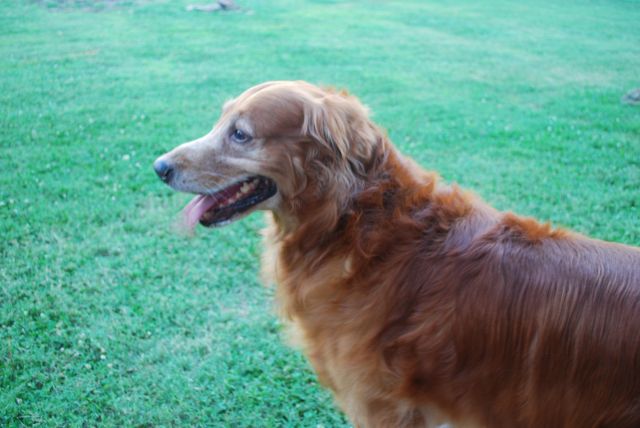 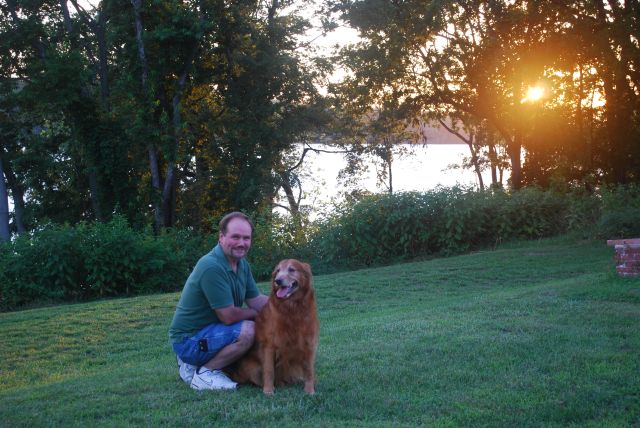 Just like me, he is discovering lots of new things, like this fake owl on the porch! I don’t think he cares for it. 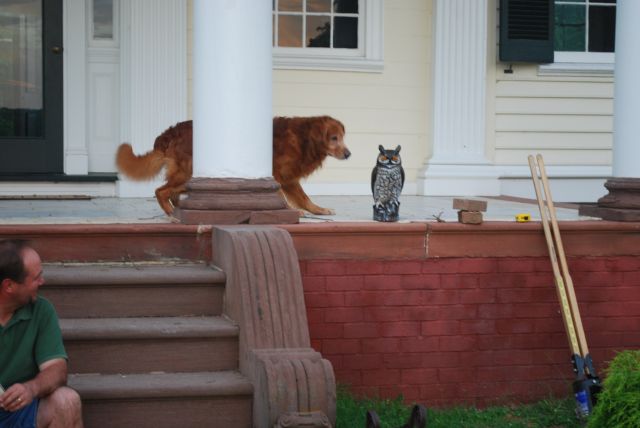 After all the hard work, the end of the day gave us a wonderful sunset!

Keep up on all the things going on at Belle Grove

Today we hit 1000 Likes on our Facebook Fan Page!

Thank you to everyone for “liking” us and “sharing” us with your Facebook Friends!

But of course, the way things have been going with this journey, this achievement couldn’t just happen.

There has to be something special to go along with it!

Grab a “hankie”- you are going to need it with this one!

After work, I ran over to the hair salon to get my hair trimmed. I arrived a few minutes early so I was sitting in my car checking my email really quick. While I was doing that, I received a call. I didn’t recognize the area code, but I went ahead and answer it. The conversation went a little like this:

Gentleman:  “Hi, is this Michelle Darnell?”

Gentleman: “Hi Michelle. I was just calling to see if you have a room available for this weekend. I would like to bring my wife up to stay.”

Gentleman: “Oh I see. Well, we can do that. I had gotten your card from you at the hospital and wanted to see if we could come.”

With that I knew who this was. If you have been following our blog for a while you already know. But for those who have just joined us let me fill  you in. Back in early November, I received a call that my mother was in the emergency room. By later that evening, she was up in ICU and having a pacemaker put in. By the next day, she had had a massive stroke. Seems that she had been walking up a flight of stairs and fell and knocked up her knee really bad. That was a Friday night. By Saturday she was found wondering the apartment complex where she and my step father lived. By Sunday, three blood clots had broken loose. One traveled to her heart and two traveled to both sides of her brain. By Monday, we knew that she wasn’t doing well. She was blind, couldn’t speak, and couldn’t move. After consulting with the doctor, we knew there was no hope. Two days later we had her moved to another floor and the pacemaker removed. Seven days later, she passed away. Just two days before Thanksgiving. The following Monday, we had her funeral. One week later, it was her birthday. One month later, it was Christmas.

During the time we were at the hospital, we came into connect with so many wonderful people. Some we only saw once or twice. But there were those that seemed to just be there at every turn. Guy was one of those people. He had come in to help with the IV that gave our mother the pain medicine to make this last journey a little easier. We would later bump into him in the hall and as we got on or off the elevator. He always listened and asked us about mom. He just seemed to know when we needed that added support. He was just there. He was our secret “angel” that God had sent to us to help comfort us.

In our conversation today, he asked how we were doing. I told him that we were doing better. That it had been hard at first, but we have gotten back into a routine and it really helped. I told him about our last few months and all the wonderful things that we had happen since the hospital.

Then he told me that he would keep up with us until we opened. He said, “I just liked you on Facebook so I can keep up with you. In fact, I was the 1000th like.”

I stopped him and said, “You were? How wonderful! We have been working towards that goal for several weeks now. To have you as the 1000th Like is just something special!”

We exchanged a few more words and hung up. But really I just couldn’t focus on what he was saying. All I could think was, “Oh wow! Guy was our 1000th Like!” It was as if my mother got the chance to be that special number! Like she was telling me, “I am still here. I am with you on this journey. I haven’t forgot you.” It was so overwhelming. It still is.

So while we are celebrating making this small goal, little did I know it would come to mean so much to me.

Thank you to all of you for supporting us! For being those secret “angels” with words of support, thoughts and prayers! We really couldn’t have gotten this far so fast with out each of you!

Soon we will be celebrating the opening day of our beloved Belle Grove. And as we all stand there smiling and raising our glasses, in our  midst will be someone else cheering us on!

To see pictures of Belle Grove, both old and new

From Brett and Michelle

This morning Brett and Hurley ventured out into the snow and cold.

Hurley loves playing ball, even if it is a snowball! 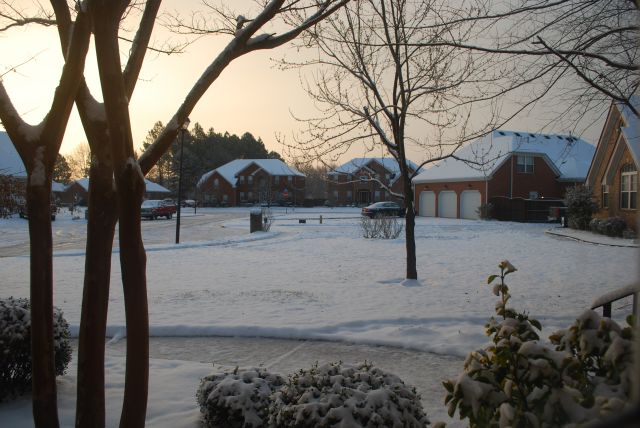 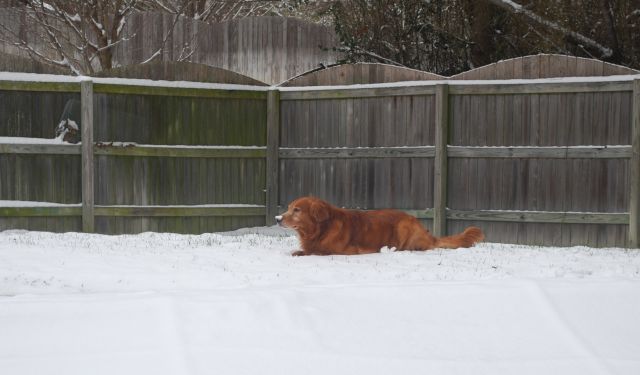 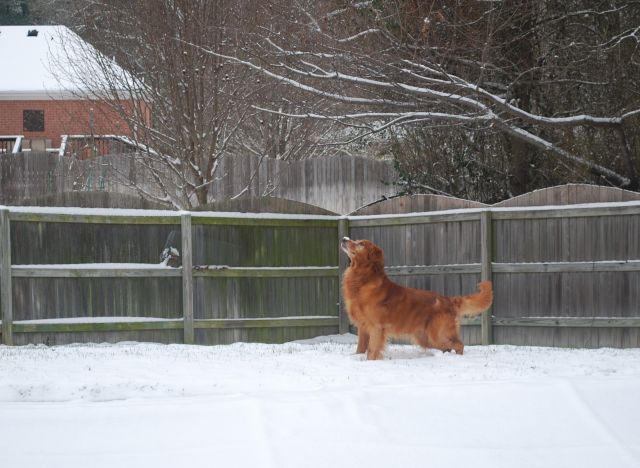 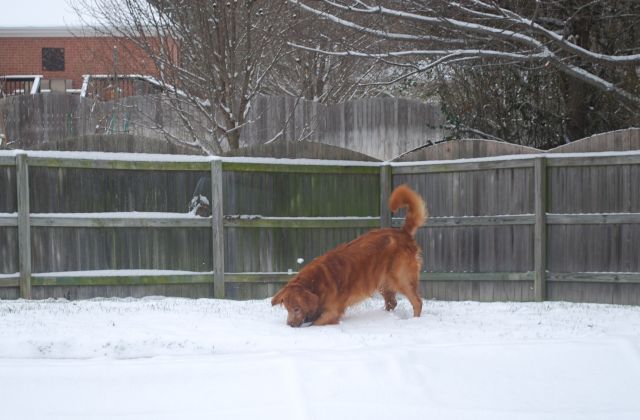 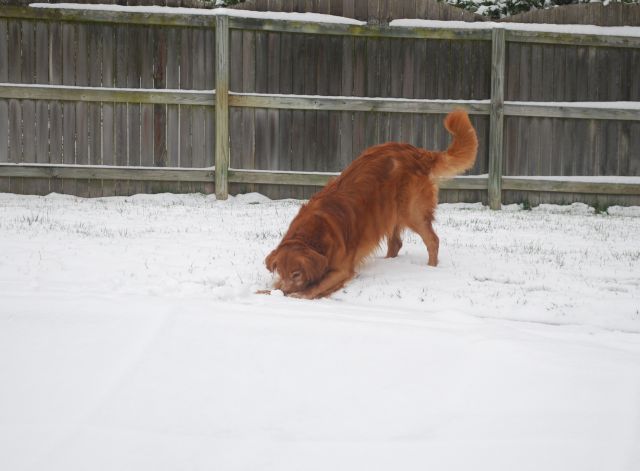 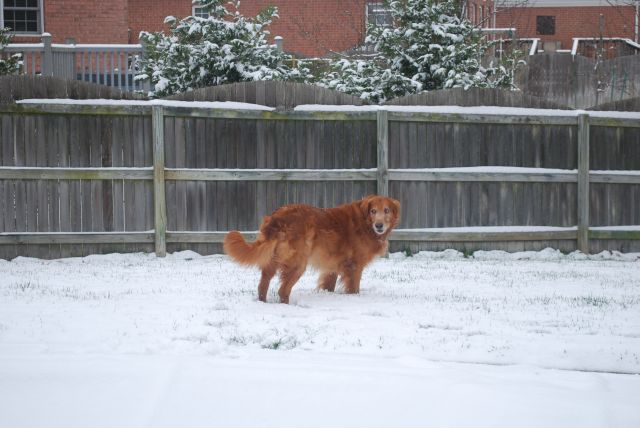 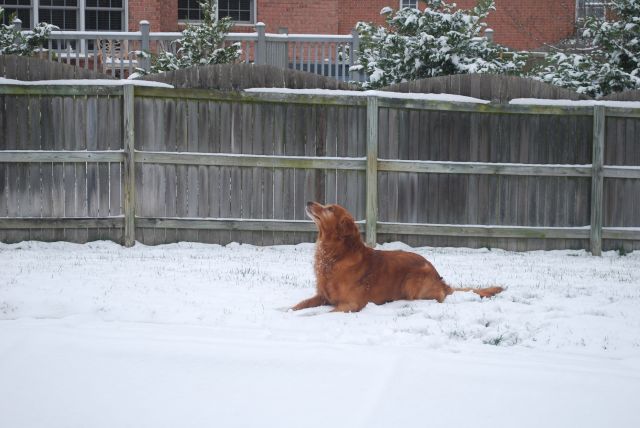 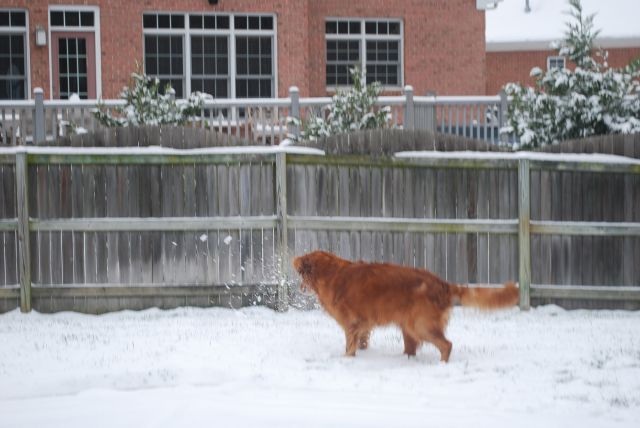 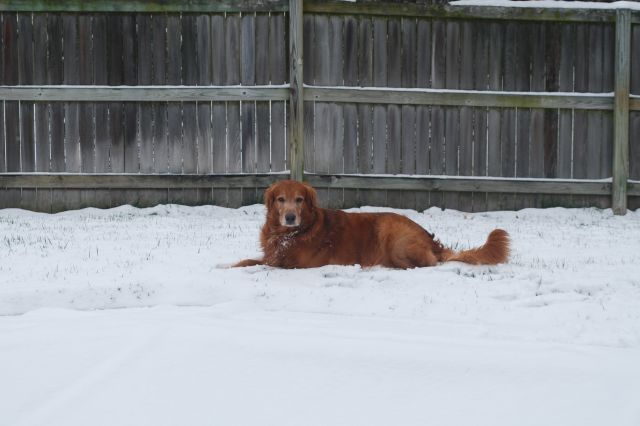 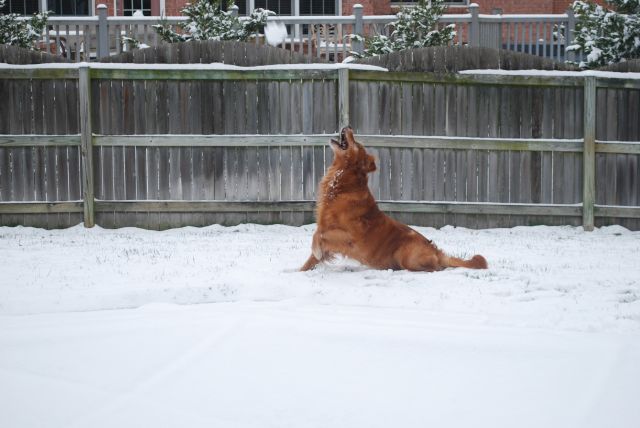 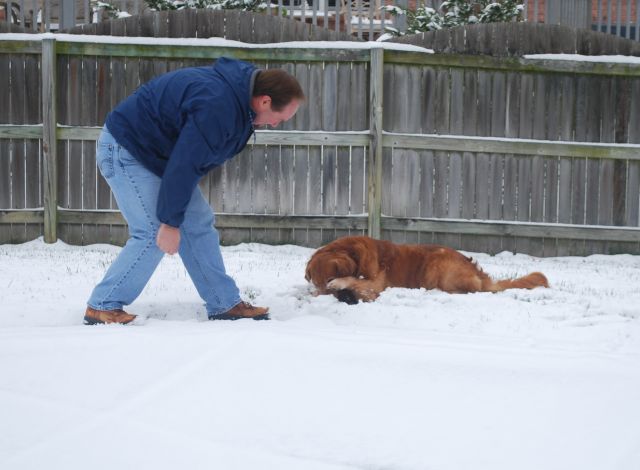 To see more of Hurley