When we left off, we had talked about our owner, Captain John F. Jack or as he was better known “Alfalfa Jack”. We still haven’t been about to find much more on his personal life. Just that from the newspaper in our area and the photographs from California. We do know that he owned Belle Grove from 1906 to 1916. But the last piece of information about Captain Jack is a newspaper article dated July 20, 1911.

This article talked about a fire in the barn at Belle Grove. The barn and 250 tons of alfalfa were lost along with a large amount of farming equipment. The origin of the fire was never known. It resulted in a $10,000 loss. Captain Jack did not have insurance on the barn or equipment. 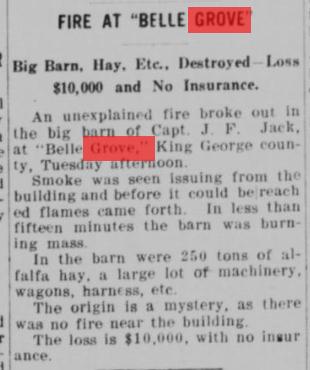 From here the trail grows cold. I have not been able to find any other information on Captain Jack. We had written that he had sold the plantations in 1911, but we have since found out that it was 1916 when he sold it.  So the fire had not been so bad that it was the “straw that broke the camel’s back”.  Only time will tell as we hope to under cover the mystery of whom Captain Jack was and where he ended up.

Captain Jack sold Belle Grove to William H. Allen and Otto F. Brandt also from California. But sadly, we have again run into a brick wall with their history. We haven’t even been able to find newspaper articles. So we are going to have to hope some oral history will come forward sometime to direct us in the right direction.

I can’t tell  you how much we have under covered thanks to oral history! Through the blog and through our newspaper articles that have come out we have found names of plantation managers, caretakers and field hands. This is history that would have been lost had these individuals had not come forward. This is the history we hope to save before all those who know are gone. 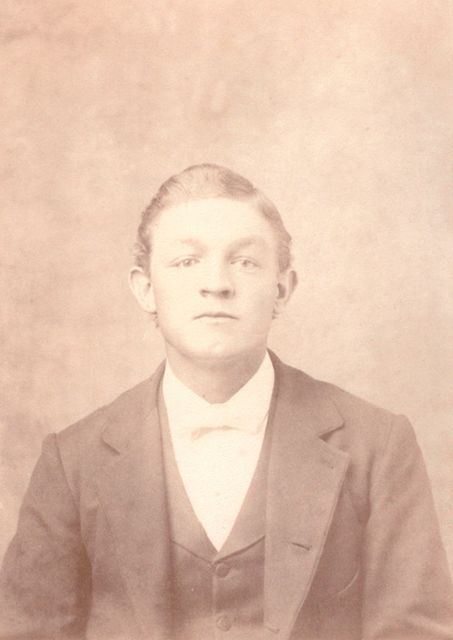 Charles Kendall Hearn was born February 22, 1878 in Walnut Grove, Virginia. His father was Samuel Batson Hearn VI (1841 to 1917) and his mother was Mary Virginia Gibbs Hearn (1850-1921). Charles’s middle name “Kendall” came from his grandfather. His family lived in Port Royal, Virginia, which is just across the river from Belle Grove in the 1880. 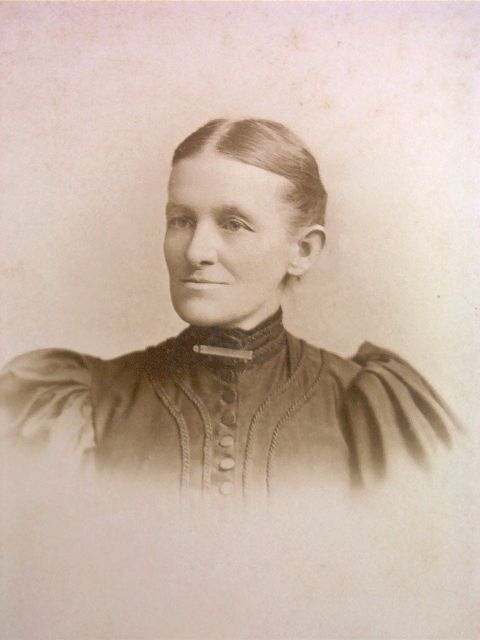 In 1897, Charles was a pursuer on the Weems Steamship line out of Baltimore. He was appointed to the position of Purser on the Steamer Westmoreland, formerly held by Mr Ruggles Taliaferro of Baltimore.

In 1898, Charles married Mary Etta Bruce. According to a paper I found on Ancestry.com, Charles was not yet 21 when he married Mary. It seems back then you needed permission from your parents to marry if you were under 21 years old.

Charles and Mary would have two daughters, Nellie Brooke Hearn (1901-1993) and Lucy Kendall Hearn (1904-2001). In 1906, Charles was listed as a farmer, blacksmith and wheelwright near Port Royal. In 1916, he was part of a business called “Hearn Brothers” who were blacksmiths and wheelwrights.

Sometime in the 1920s, Charles became the plantation manager for Belle Grove Plantation.

Taken along the Rappahannock River at Belle Grove when Charles K. Hearn managed the estate there. 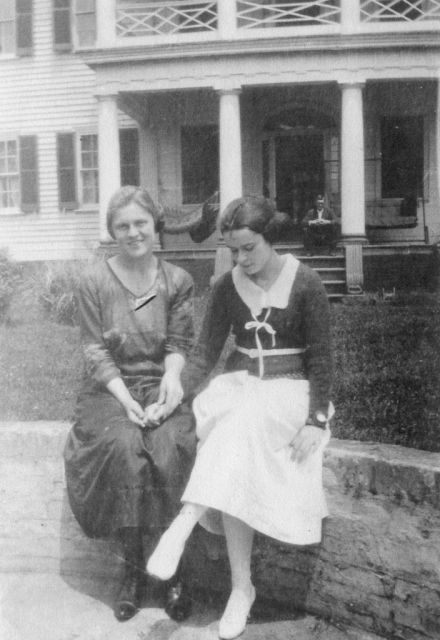 Nellie and Lucy on the Riverside of Belle Grove 1920s

John Thomas Hearn, brother of Charles on the Riverside of Belle Grove 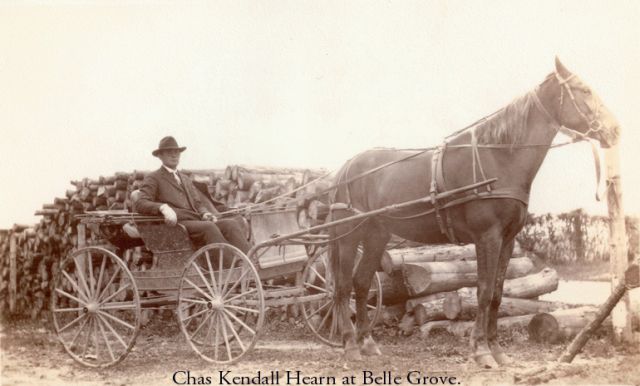 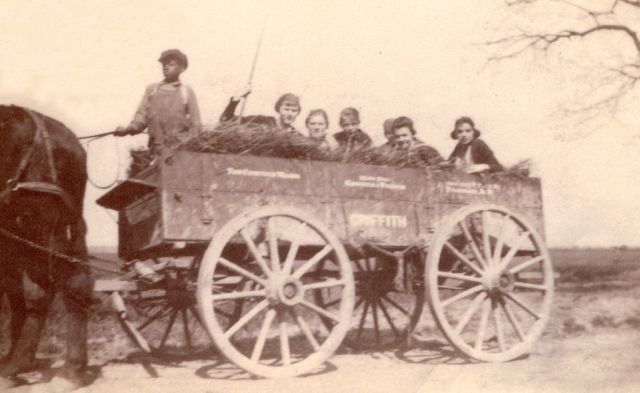 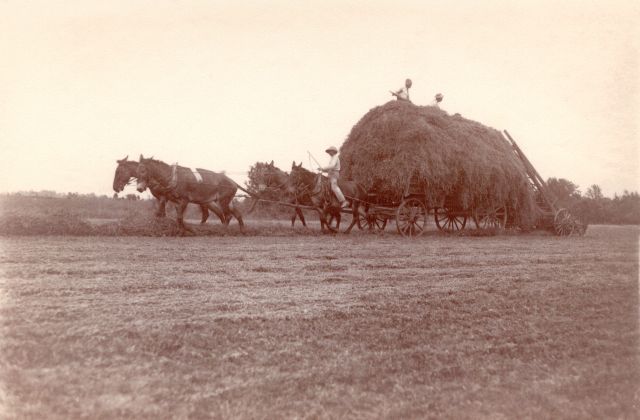 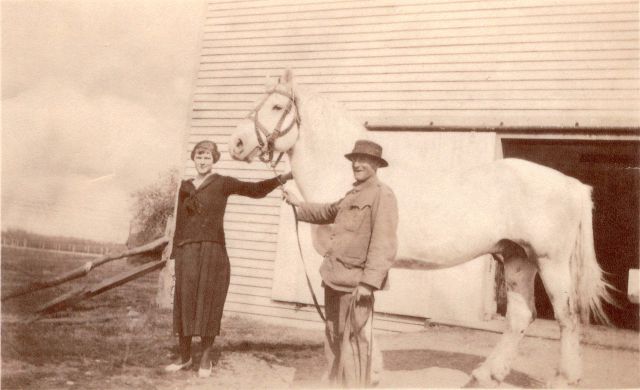 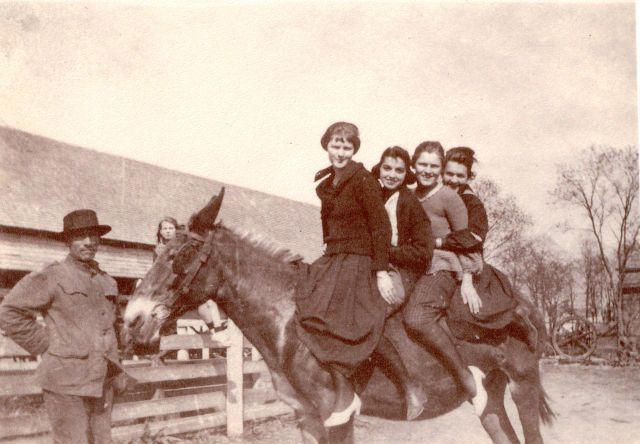 In 1924, a group of citizens raised $75,000 and established a bank in Port Royal. There were seven directors of the bank and Charles Hearn was one of them. The bank would close in 1934. 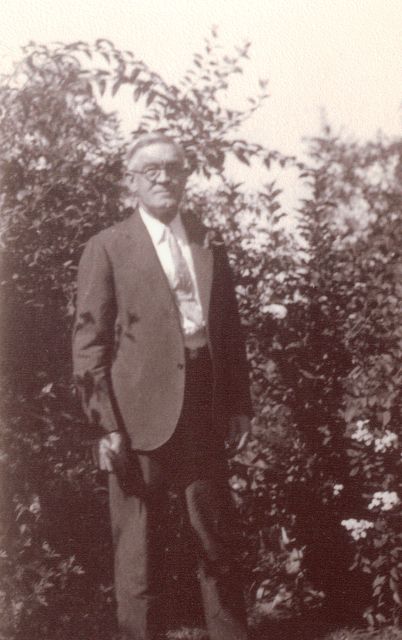 When I began my search for Captain Jack, there were very few leads on him. So I first turn my research to the internet. Knowing he was from California, I started my search there. Libraries and museums have been some of my best resources of information so I looked to those located in Los Angeles. This search would reward me with one of the best finds I have had in regards of Belle Grove’s history.

I have to tell you the wait was terrible. I didn’t know what they were of and I could only hope they would give me some ideas as to what it was like during this period at Belle Grove. Wild thoughts ran through my mind. Could there be a lot of pictures of the Mansion and grounds? Could there be pictures of Captain Jack himself? At this point, no one knew what he looked like. So I just held me breath and waited.

We were rewarded handsomely…

This collection was marked as 1906.

This would means they were taking during his search for the right land to try his experiment on alfalfa farming. 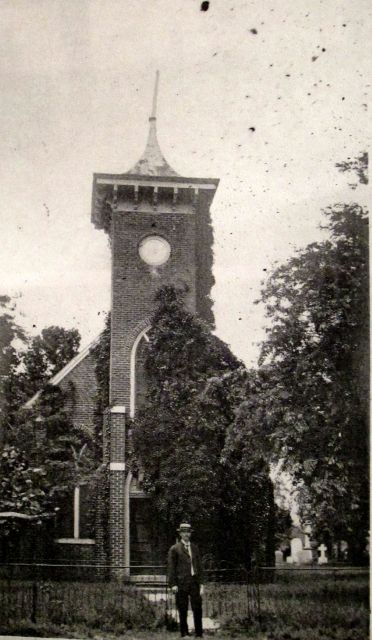 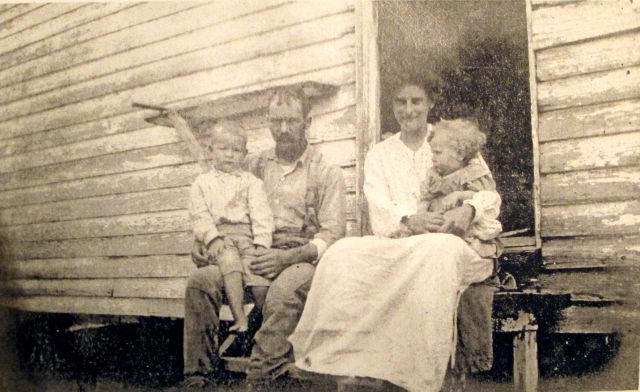 A Tenant and His Family on the Walsingham Plantation, next door to Belle Grove Plantation
1906

Barns on the Walsingham Plantation
1906 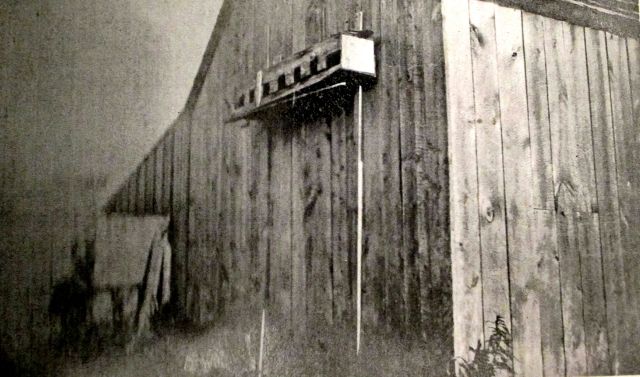 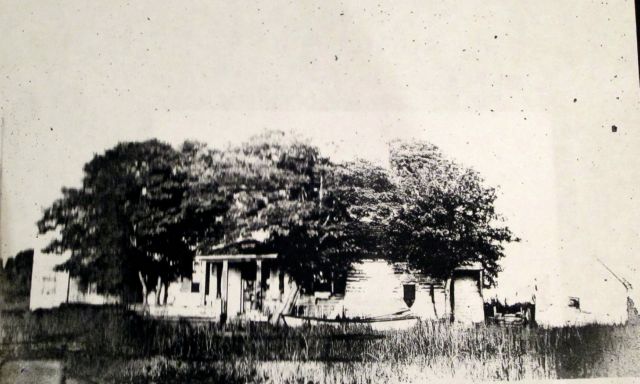 Farm Building on the Bank of the River
1906 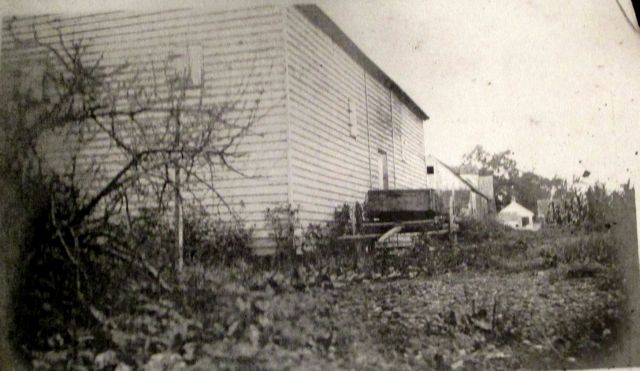 Granary near the old home site on the Walsingham Plantation
1906 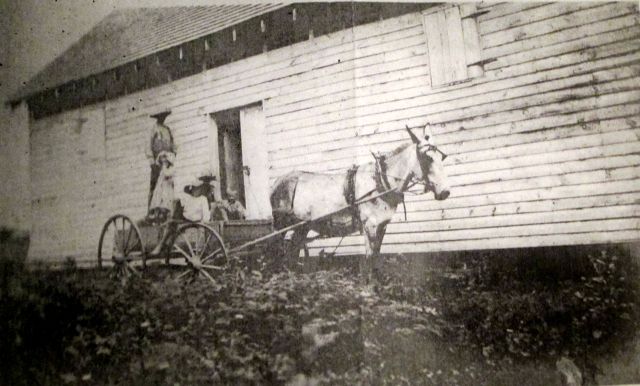 Granary on the Back Field of the Walsingham Plantation
1906 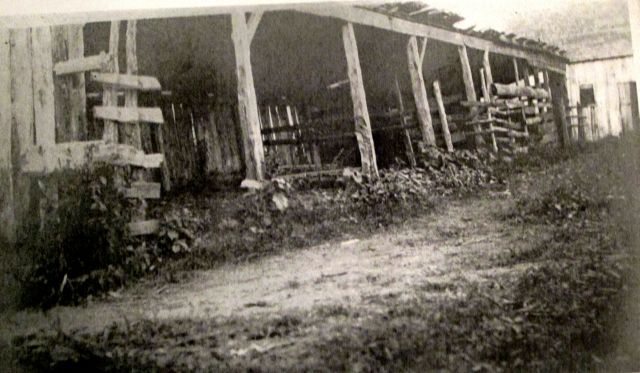 Old sheds on the Walsingham Plantation
1906 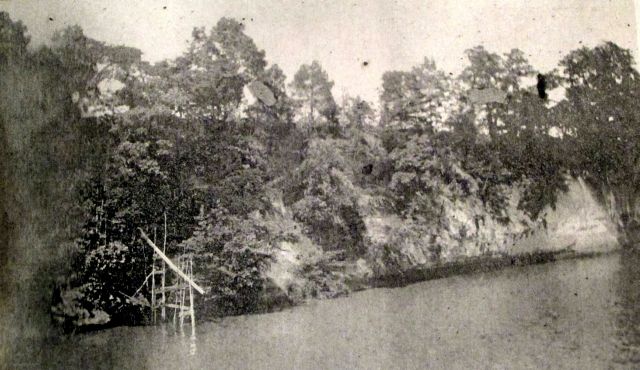 Teams plowing on the Walsingham Plantation
1906

Tenants Quarters on the Walsingham Plantation
1906 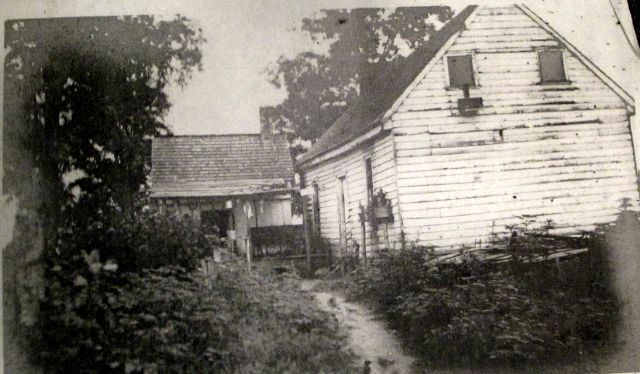 Tenement House on the Back Field of the Walsingham Plantation
1906

The Spring House at Walsingham Plantation
1906 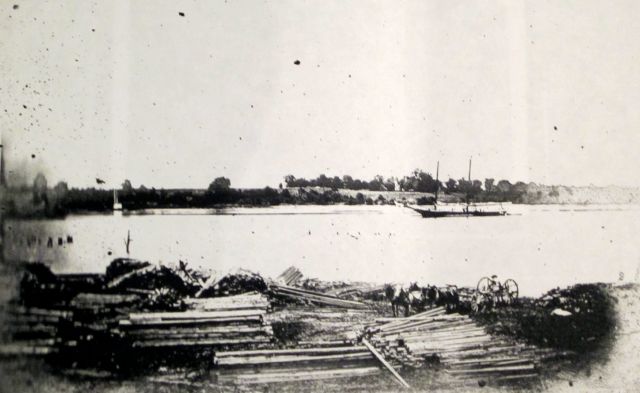 Walsingham Plantation on the Northerly Shore of the River. Lumber on the Port Royal Side
1906 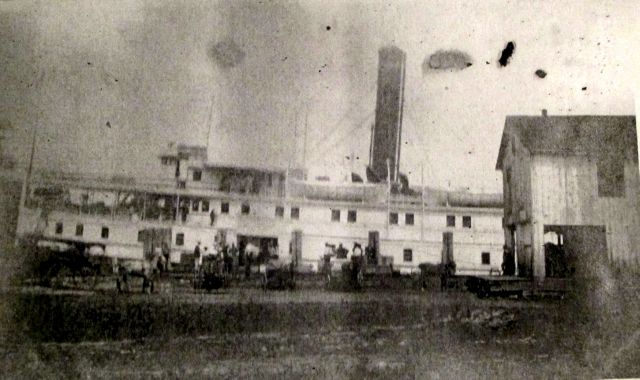 Loading of Freight on a Steamer at Port Conway
1906 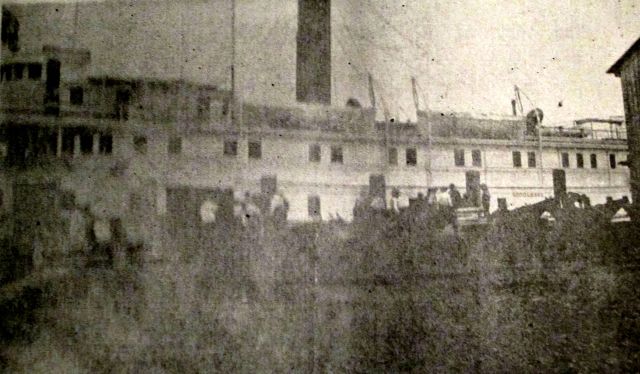 Loading of Freight on a Steamer at Port Conway
1906

Looking up the Rappahannock. Railroad Bridge in the Distance
1906 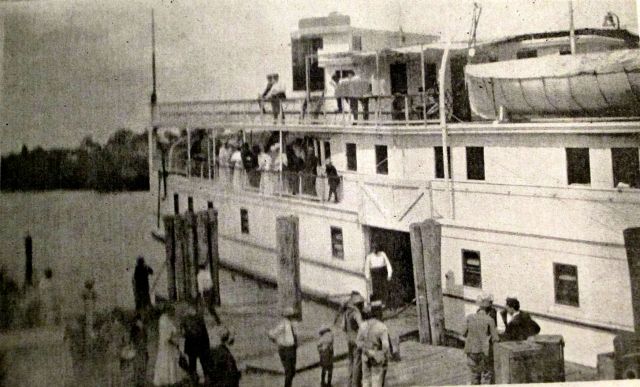 Showing Port Royal Wharf and Lumber Ready for loading opposite Port Conway. If you look to the left on the high bank you will see Belle Grove. Across the river is Port Conway’s Ferry and Wharf. Today this area is lost to the wooden area around Belle Grove and the James Madison Bridge.
1906 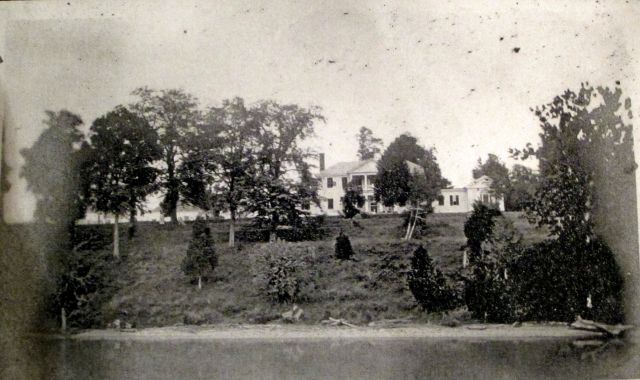 Belle Grove viewed from the river
1906

Belle Grove seen from the river
1906

Belle Grove from the Carriage side in the Bowling Green. Some of these trees are still standing there today.
1906

River side of Belle Grove. The tree to the far right is still standing there today.
1906

River side of Belle Grove. We are assuming this is Captain John F. Jack.
1906

To see more photographs of Belle Grove over the years