Update to the Virtual Housewarming Party

The library is starting to fill up. It is so wonderful to see the shelves with such great books on them! We want to thank everyone that has sent books to our historic library! It has meant so much to us!

But we aren’t done yet!

We still have several shelves left and sadly the James Madison section is really looking empty compared to the other sections. General Interest is starting to over flow. I can’t even reach the upper shelves to place the new arrivals there!

If you have any books or would like to donate some of our Wish List Books, please send them to us at:

Please don’t forget to inscribe them with your name, state or country and the date so we can make it a part of this beloved plantations history!

We would like to break each section down to catalogs.

Here is what they are: 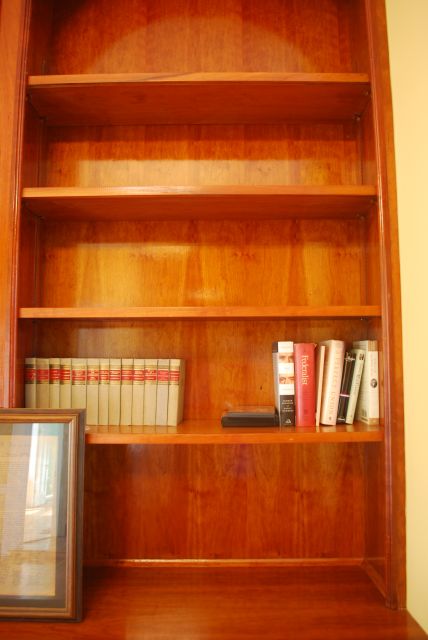 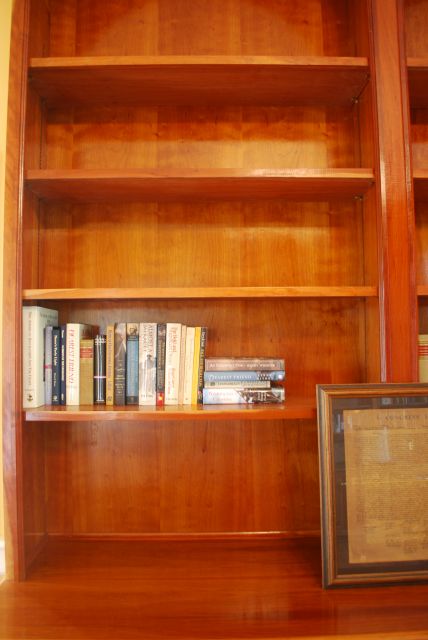 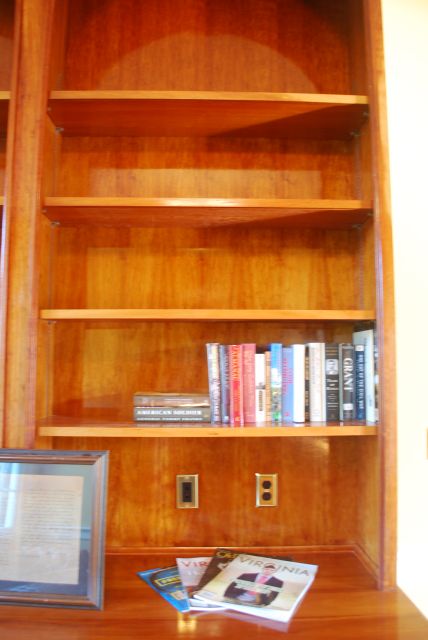 Books on the military events and American History – Since Belle Grove’s history spans every period in American history, we would like this section to have books about the periods in American History. Of course the American Revolution and Civil Wars touched Belle Grove because they happened here, we would like to have several on these. But we would also like to have the rest too because it would have touched each family in some way. 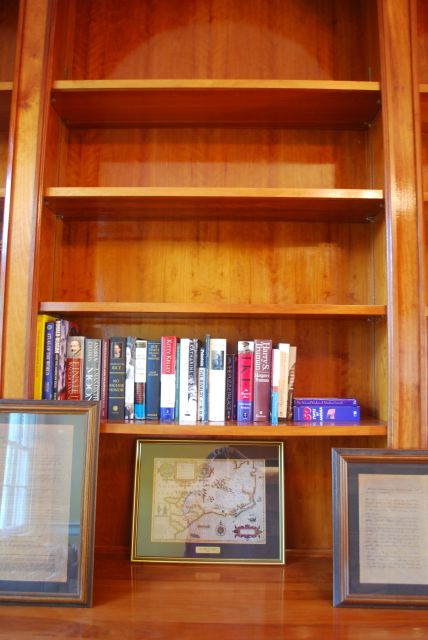 Books on Virginia and American Life – These books would talk about life in Virginia and in America. Send us a book about your great state or your favorite Virginia sights.

General Interest Books – These can be of any interest. Fact or Fiction. Good stories that you think people would like to read. You may also like to send us a copy of a book you have had published.

A Couple of Requests

Because these books are going to be placed in this historic home, we would like to acknowledge you for making this donation to our library. In the front of the book, we ask that you place the following information:

“This book was donated to Belle Grove Plantation by (your name) from (City, State and Country) on (date) to help complete their library.”

This will help us preserve your place in our history.

We would also like to request that your book be a hardback book that isn’t too large. If the book is too large, it may not fit on the shelf. Paperback books are nice and inexpensive, but as people read them, they get worn over time. We would like your book to last as long as possible.

Books we already have

A Slave in the White House – Elizabeth Dowling Taylor

The Debate on the Constitution – Bernard Barilyn

Places I Have Known Along the Rappahannock River – Beverley C Pratt

Memoris of a Geisha – Arthur Golden

The Law of War and Peace – Hugo Grotius

On the Nature of Things – Lucretius

On Man in the Universe – Aristotle

The Letters of Madame – Volume I and II – Gertrude Scott Stevenson

The Gold of Exodus – Howard Blum

The Sum of All Fears – Tom Clancy

How Did You Do It, Truett – S. Truett Cathy

Me My County My God – Dr. C Thomas Anderson and Don Enevoldsen

Run to the Roar – A Fable of Choice, Courage and Hope – J. Randy Forbes

How – Why HOW we do anything means everything – Dov Seidman

Back in the Day – Michael Powell

I Should Be Extremely Happy in Your Company, A Novel of Lewis and Clark – Brian Hall

Legion of the Lost – Jaime Salazar

A Man on the Moon – Apollo Astronauts – Andrew Chaikin

Atlas of the World

The National Geographic Society – 100 years of Adventure and Discovery

Civil War Parks – The Story Behind the Scenery

Slavery at the Home of George Washington – Philip J. Schwarz

Race and Revolution – Gary B. Nash

Check them out at

Thank you Greg and Karen from Williamsburg, Virginia!

Our Times – The Twenties – Mark Sullivan

Take Our Advice: A Handbook for Gardening in Northern Virginia – Margaret Fisher & Friends

The American Revolution and the Craft – I. Lewis Langley

Thank you Katherine from Alexandria, Virginia!

Keep What you Earn – Terry Coxon

See I Told You So – Rush Limbaugh

Island in the Sun – Alec Waugh

The Best and the Brightest – David Halberstam

The Family – The Real Story of The Bush Dynasty – Kitty Kelley

The Rivalr – Mystery at The Army-Navy Game – John Feinstein

The Art and Etiquette of Gift Giving – Dawn Bryan

The Diplomacy of The American Revolution – Samuel Flagg Bemis

Thank you Debbie from Puyallup,Washington!

The Wit and Wisdom of Abraham Lincoln – Anthony Gross

These are books we would like to have for the library.

To see what we are up to at Belle Grove Plantation

You know as Brett and I prepared to open Belle Grove Plantation, we have worked hard to “research” places to eat for our guests. Yes, it is a true “hardship” to go to these fabulous restaurants and sample all these great foods. But we do it for the good of our guests. And nothing is too good for them!

But during the week, while I am here alone, I like to go to one of the local diners for breakfast. It gives me a chance to enjoy seeing and talking with others. Not that I don’t get visitors at the plantation. But this is a little more laid back and casual. And since I will be cooking others breakfast soon, it is nice to have someone make it for me now.

I started out going to a place located in Port Royal called Hornes. It is a landmark diner on the corner of Route 17 and Route 301. The staff there is wonderful and the food is good. But I found another place that I have been drawn back to over and over again. 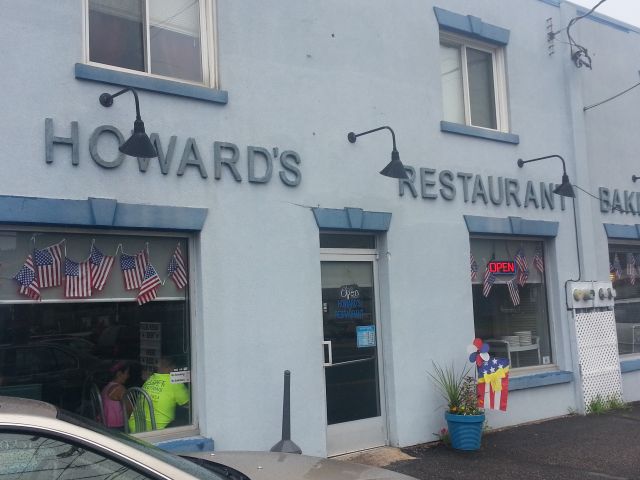 This little diner is called Howard’s Bakery and Restaurant. It is located in King George (about 5 or 10 minutes away from Belle Grove) along Route 3. Now I tried to do some research on the history of Howard’s, but of course there isn’t much on the internet about it. What I did find is that it had changed hands a few times over the past 40 plus years. It once was called Clift’s and then Shirley’s and now Howard’s.

To see it today, you wouldn’t give it a second glance.  The outside isn’t flashy and it is saddled up next to a car garage. But as Brett and I have learned through our travels, looks can be very deceiving.

Inside you will find what you would expect of a small town diner. Booths, tables and a lunch counter in a small room. No fancy decorations and no frills. The only decorations for July is the banner of American Flags hanging in the front windows and the paper party decorations for the 4th of July. 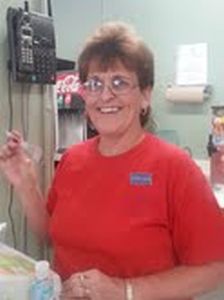 I have come to know the staff at Howard’s and they have come to know me. I come in and have a sit and they walk over with my morning beverage before I even sit down. Talk about a good memory! Then they ask me if I am going to have the same breakfast as last time, which I always seem to do. Then she starts writing it down as she repeats each items from before. It is as if I just ordered it! You think about the number of faces they see and to remember a single order is just amazing! How many places in the larger cities do you know that remember you name, let alone your order from two or three days before!

Over time, I have come to understand the back lunch counter is where it is at. Howard’s isn’t just a diner that serves breakfast, lunch and dinner. It is where the locals come to meet and talk. It reminds me of the coffee houses and taverns in Colonial America. This is where the citizens of our new country would go to get news of what was going on. That holds true to Howard’s. One of the first times I came in, just after moving up in April, I was at the lunch counter to pay for my breakfast. There sat two gentlemen enjoying their meal. As I stood waiting for the cashier, one of the gentleman asked me how the bed and breakfast was coming. Now mind you, I have never met this person before, never seen him, and yet he knew who I was and what I was doing in King George. I am learning that news and gossip travels faster here than on Headline News television.

Today, almost every time I go in, I see someone that I know or meet someone new. I hear about what is going on in King George as I sit alone in my booth enjoying my breakfast. You can’t help but eavesdrop in a room this size. But I see the same faces almost every time. And believe it or not, it is comforting. It is great to know that Small Town America is still alive and well. That a  pleasant “hello” from a stranger is a sincere greeting and that stranger won’t be a stranger for long.

Yes, Howard’s food is good. Best Down Home Cooking you can wrap your lips around. But it isn’t just the food, its the people inside that makes this place somewhere you don’t want to miss. Cracker Barrel doesn’t have anything on this Small Town Diner.

To see more places we have been