When we started Belle Grove Plantation Bed and Breakfast, we had a vision for what we wanted for the plantation. We didn’t want to just be known as a luxury bed and breakfast or just an elegant wedding and special events venue. We wanted to honor the history that has occurred here and to help educate others about it.

From time to time, we have children coming with their parents to see “the Birthplace of President Madison”. The parents wish to show the children where history happened in hopes of touching something inside them as well as teaching them about their history as an American Nation. On two occasions we have had young students come in hopes of getting information for school projects. The first happened just after we opened. The young man came with his mother and siblings with a desire to learn more about President Madison. Later after the project was graded, the young man’s mother sent me a message on Facebook letting me know about his final grade, an A+.

Back in January, when we were recognized by the Virginia General Assembly in Richmond, a received a call from another mother in North Carolina. Her daughter was doing a school project and she wanted to get more information about President Madison. After I returned home, I was able to provide her with information about James Madison and his mother’s family.

Last night I received an email from this mother with the final grade for her daughter, Lani Williamson’s project. She got a 100%! But the best part was that she appeared in their local newspaper! She dressed as President Madison for her project and from all views, it looks like she did a fabulous job! We offer our heartiest congratulations to a job well done! 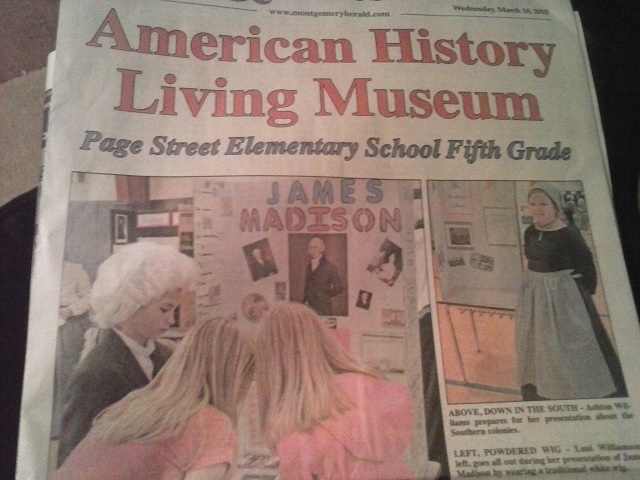 (Lani Williamson is dressed in the white wig) 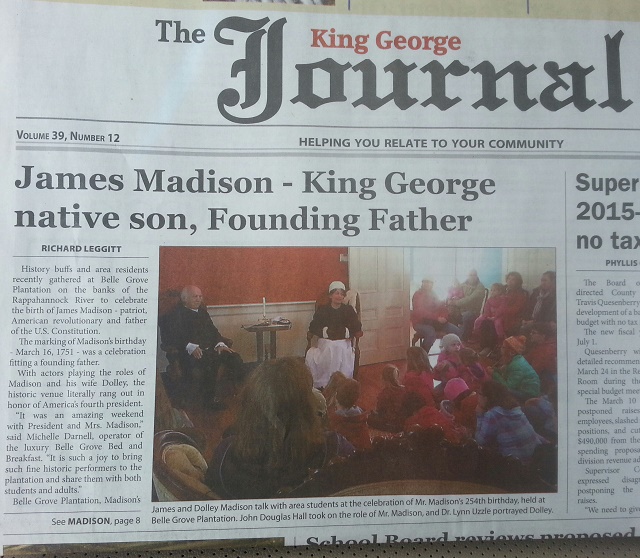 History buffs and area residents recently gathered at Belle Grove Plantation on the banks of the Rappahannock River to celebrate the birth of James Madison – patriot, American revolutionary and father of the U.S. Constitution.

The marking of Madison’s birthday – March 16, 1751 – was a celebration fitting a founding father.

With actors playing the roles of Madison and his wife, Dolley, the historic venue literally rang out in honor of America’s fourth president.

“It was an amazing weekend with President and Mrs. Madison,” said Michelle Darnell, operator of the luxury Belle Grove Bed and Breakfast. “It is such a joy to bring such fine historic performers to the plantation and share them with both students and adults.”

Their daughter, Eleanor Rose Conway, returned to the plantation in December of 1750, three months before the birth of her child, who would grow to become one of the world’s foremost political thinkers. Though born at Belle Grove, Madison is more closely associated with Montpelier, the Orange County plantation where he grew up, spent his retirement years and died on June 28, 1836.

“Where better to celebrate James Madison than at the plantation where he drew his first breath?” she said.

The festivities include a James Madison Essay Contest sponsored by the King George American Legion.

“We look forward to future events with the American Legion and hope this is the beginning of a long standing annual event.” Darnell said.

A Princeton (University of New Jersey) graduate, Madison skillfully argued for ratification of the new representative form of government at the Constitutional Convention of 1787. Along with Alexander Hamilton and John Jay, he co-authored the Federalist Papers, which helped swing popular support behind the new Constitution.

Winning election to the House of Representatives, Madison authored the Bill of Rights, which was ratified in 1791. In 1794, he married Dolley Payne Todd, who served as Washington D.C.’s leading socialite during the early 19th century.

Madison would serve as Secretary of State during the presidency of his friend, Thomas Jefferson, during which time the Louisiana Purchase, doubled the size of the new United States.

Madison won election as president in (his) own right in 1808. His tenure coincided with a time of prosperity of the nation, but he also presided over the War of 1812, which saw the British burn the White House. 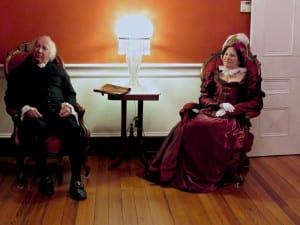 Two things I do want to note about President Madison. He is the last Commander in Chief to see combat. He also left the Office of President more popular than when he entered it. Not many Former Presidents can boost those honorable distinction.