Finally, The Indians Have Arrived

Since we have been away this last week, we spent much of our day today catching up on errands, emails and preparing for our weekend guests. We were excited to see our first guests this weekend because they have been with us before. The last time they came, the weather wasn’t so nice though. We had just come out of a 24 hour period with no electric and fifteen inches of snow on the ground. We were happy that they returned to enjoy a cozy Madison Suite with its gas fireplace and while cold, no snow.

After running to the grocery this morning, we enjoyed an early and quick lunch. Then we headed over to Ferry Farm, boyhood home of George Washington to see our favorite archeologist, Mara. She has been working with us since the beginning to identify and date all our artifact finds. Over the past week, we have been investigating some other areas of the plantation. While looking around, we started finding some really nice artifacts. So I bagged them up and headed over to see Mara.

One of the artifacts we took was something we placed on Facebook to see if anyone else could identify. Generally I can send a few pictures of an artifact and Mara can give me a good idea of what it is. This one stumped her. In fact it stumped everyone. But after our visit with her and Melanie at Ferry Farm, we were able to get a good idea of what it might be. 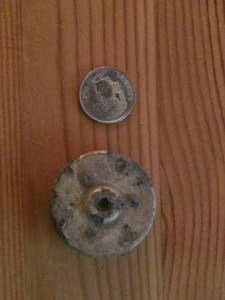 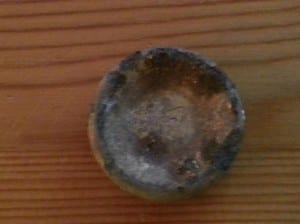 We had people say it looked like a drawer pull, a drawer wheel, a button and even a toy wheel from a car. But none of them made sense because the artifact is so heavy and gilded. After Mara and Melanie studied it, they come to the possible conclusion it was the foot of a table or chair, possibly from the 1920s or 1930s. Now looking  at it, I can see that as a good possibility. 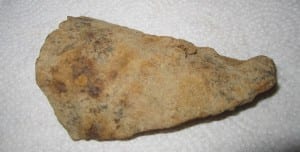 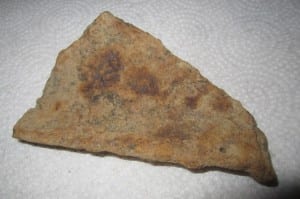 When I saw this piece, I was sure that it was part of a cooking pot or kettle. I have found other pieces like this with a foot on them. This one looked like it had a rim on it. But to my great surprise, Mara told me it was part of a sewage pipe. No great excitement there! 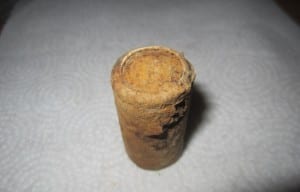 This was another one that stumped us. At first I thought it might be the end of a rifle, but the bottom was enclosed. Mara showed it to Melanie and she knew what it was . . . an old battery. I don’t think this is colonial! 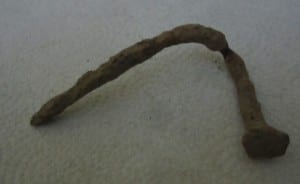 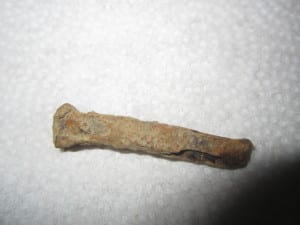 These are two nails that we found. Because of the shape of the first nail, I thought we might have found a rose head nail. But Mara told me it was just a wire nail. The bottom nail is an old square nail. We found nails all the time here. 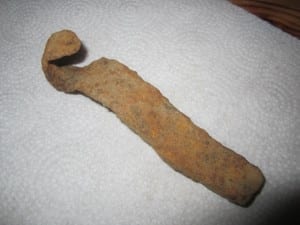 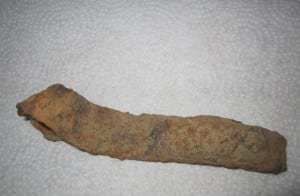 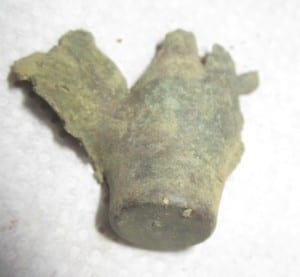 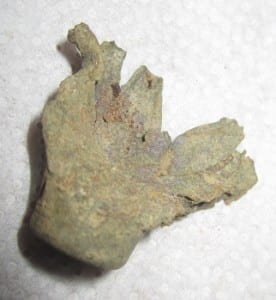 This one wasn’t too hard for us to figure out. We also knew it wouldn’t be from the Civil War. This bullet is strange in the way that it has exploded. It doesn’t look to be fired. Mara wasn’t able to tell me what caliber it was. But she did tell me it would be  20th Century. 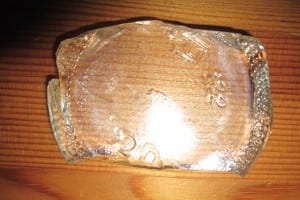 This is also a 20th Century piece of glass. After Mara did some research and emailed her findings to us this afternoon. This glass bottom dates post 1953 and is from a company out of Illinois called Lincoln Container Corp. 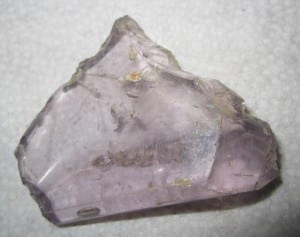 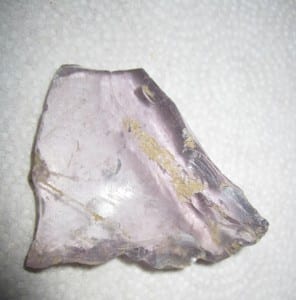 This is Solarized Glass. This glass was made with manganese in it. After it gets buried for a period of time and is exposed to the sun again, it will turn this pretty purple color. This is a thick piece of glass and could have come from a square medicine bottle. 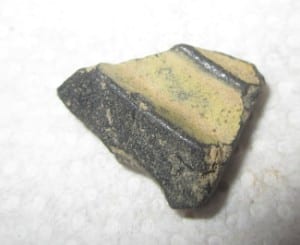 When I saw this piece, I thought we had found a rim of a bowl. I was wrong again. This is a piece of a clay pigeon. During the Hooker Family time period, they had a hunt club here and used a skeet for the hunters. This could be any time between 1930s to 1980s. 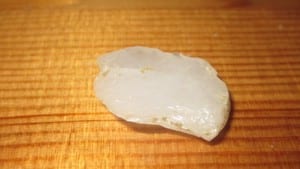 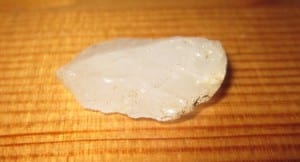 This piece is a great find! This is what is called “waste”. When the Native People and Ancient People, who lived in this area would strike rocks to make spear heads or tools, this would be the pieces that were cut away. So it is good evidence that we had a settlement here during ancient times. We have found two spear heads called “Halifax Spear Heads” that date to 3000 BC. 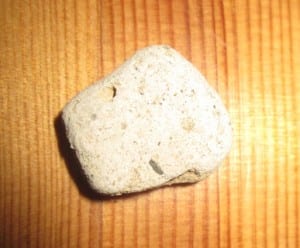 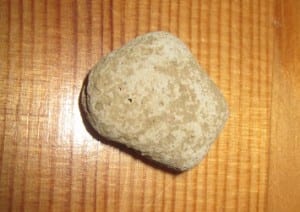 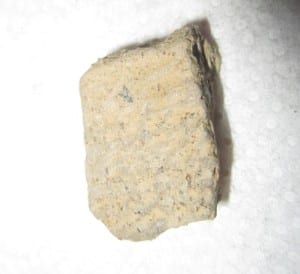 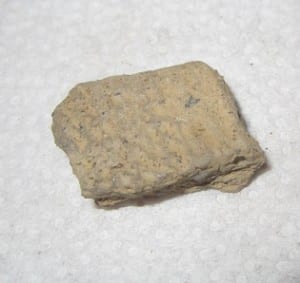 These two pieces really excited me! One thing I had not found yet was Native American pottery. With these two pieces, we have found some! According to Mara the darker piece is an Accokeek pottery dates approximately around 800 BC! This is so exciting! Melanie helped us to also determine what tribe might have called Belle Gove Plantation home. In 1608 our area would have be occupied by the Assuweska tribe. They would have been a member of the Powhatan Nation.

So now I need to do some research on this tribe to see if I can learn more about them!

Posted by Michelle Darnell | in Diary | Comments Off on Finally, The Indians Have Arrived