Before you stress too much… no, we weren’t evicted from Belle Grove! 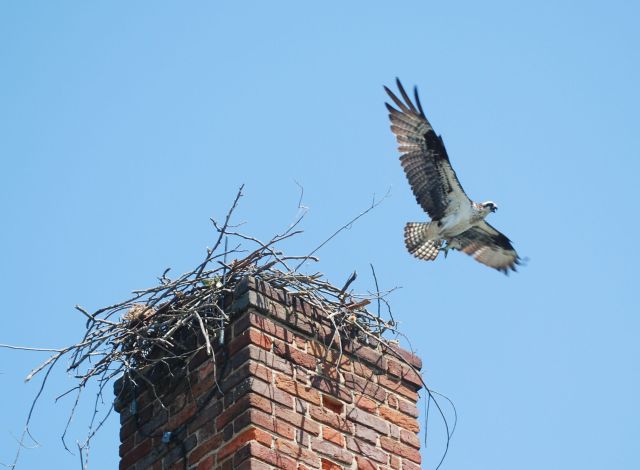 But “James” and “Dolley”, our resident osprey were!

We have a pair of mating osprey that return each year to nest and raise their young from March to September. In the time we have been at Belle Grove, our osprey have used the Formal Dining Room chimney as their place. While we love our osprey, we don’t love the mess they create while here. 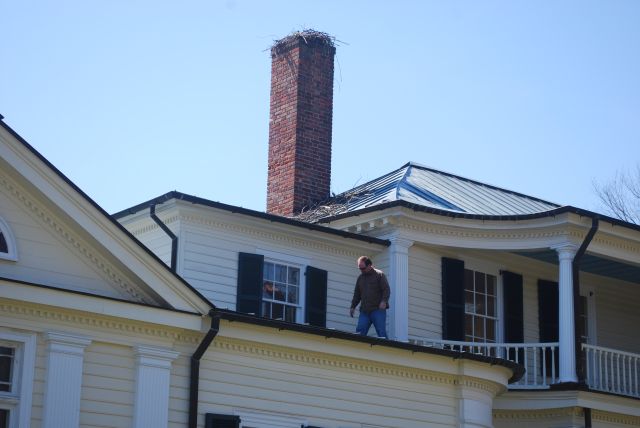 Osprey, which is also known as Sea Hawks, Fish Eagles, River Hawks or Fish Hawks are diurnal, fish-eating bird of prey. This is good news for our little bunnies! The Osprey’s diet consists almost exclusively of fish. 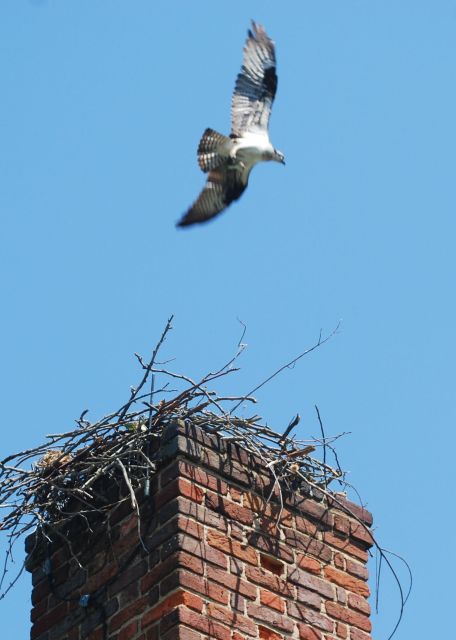 It is a large raptor reaching more than 24 in in length and 71 inches across the wings. The upperparts are a deep, glossy brown, while the breast is white and sometimes streaked with brown, and the underparts are pure white. The head is white with a dark mask across the eyes, reaching to the sides of the neck. The irises of the eyes are golden to brown, and the transparent nictitating membrane is pale blue. The bill is black, with a blue cere, and the feet are white with black talons. A short tail and long, narrow wings with four long, finger-like feathers, and a shorter fifth, give it a very distinctive appearance.

The sexes appear fairly similar, but the adult male can be distinguished from the female by its slimmer body and narrower wings. The breast band of the male is also weaker than that of the female, or is non-existent, and the underwing coverts of the male are more uniformly pale. It is straightforward to determine the sex in a breeding pair, but harder with individual birds.

In flight, the Osprey has arched wings and drooping “hands”, giving it a gull-like appearance. The call is a series of sharp whistles, described as cheep, cheep or yewk, yewk. If disturbed by activity near the nest, the call is a frenzied cheereek!

Ospreys have been known to exhibit great joint flexibility. Their limbs (wings and legs) have adapted to have greater flexibility over time. An example of this is when flying towards bright lights (e.g., sun)—they are able to bend the joint in their wing to shield their eyes from the light to aid safety while flying. 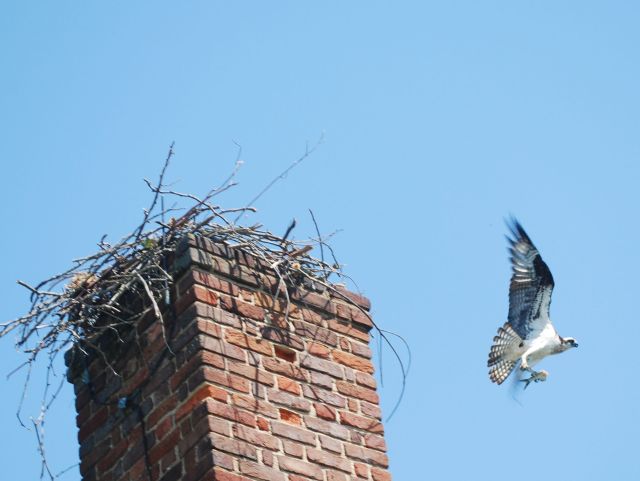 Ospreys have vision that is well adapted to detecting underwater objects from the air. Prey is first sighted when the Osprey is 33 to 131 ft above the water, after which the bird hovers momentarily then plunges feet first into the water. The Osprey is particularly well adapted to this diet, with reversible outer toes, sharp spicules on the underside of the toes, closable nostrils to keep out water during dives, and backwards-facing scales on the talons which act as barbs to help hold its catch. Occasionally, the Osprey may prey on rodents, rabbits, hares, amphibians, other birds and small reptiles. In the time we have been at Belle Grove, we have only seen them eating fish. With the river so close, there are plenty of fish for them.

The Osprey breeds near freshwater lakes and rivers, and sometimes on coastal brackish waters. The nest is a large heap of sticks, driftwood and seaweed built in forks of trees, rocky outcrops, utility poles, artificial platforms or offshore islets. In our case, chimneys. Generally, Ospreys reach sexual maturity and begin breeding around the age of three to four, though in some regions with high Osprey densities, such as the Chesapeake Bay, they may not start breeding until five to seven years old, and there may be a shortage of suitable tall structures. If there are no nesting sites available, young Ospreys may be forced to delay breeding. To ease this problem, posts are sometimes erected to provide more sites suitable for nest building. We erected a pole and platform last year to encourage them to move. They have landed on it throughout last season and we have seen them on it this season, but they have selected to use a chimney again. 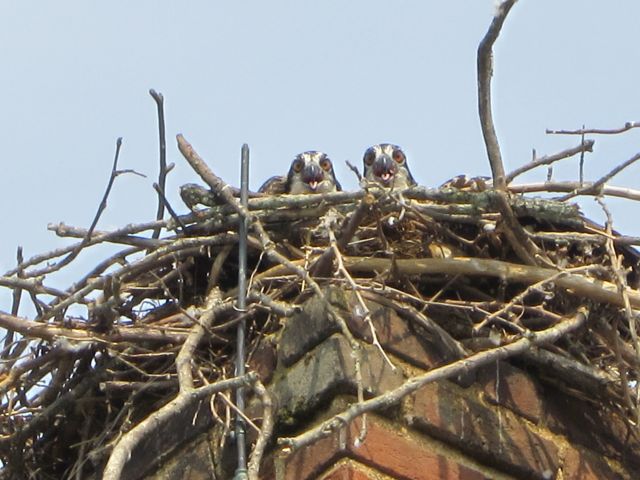 Ospreys usually mate for life. In spring the pair begins a five-month period of partnership to raise their young. The female lays two to four eggs within a month, and relies on the size of the nest to conserve heat. The eggs are whitish with bold splotches of reddish-brown and are about 2.4 in × 1.8 in and weigh about 2.3 oz. The eggs are incubated for about 5 weeks to hatching. The newly hatched chicks weigh only 1.8–2.1 oz, but fledge in 8–10 weeks. The typical lifespan is 7–10 years, though rarely individuals can grow to as old as 20–25 years. The oldest European wild osprey on record lived to be over thirty years of age. In North America, Great Horned Owls, Golden Eagles, and Bald Eagles are the only major predators of Ospreys, capable of taking both nestlings and adults. However, stealing the Osprey’s catch by Bald Eagles, is more common than predation. We have observed the Osprey and Bald Eagles here for one year. The Bald Eagles don’t stick around long with the Osprey here. The Osprey will attack and chase the Eagles even across the river. It is an amazing sight to see! At the end of the mating season (September) the Osprey head south to South America for the winter months. 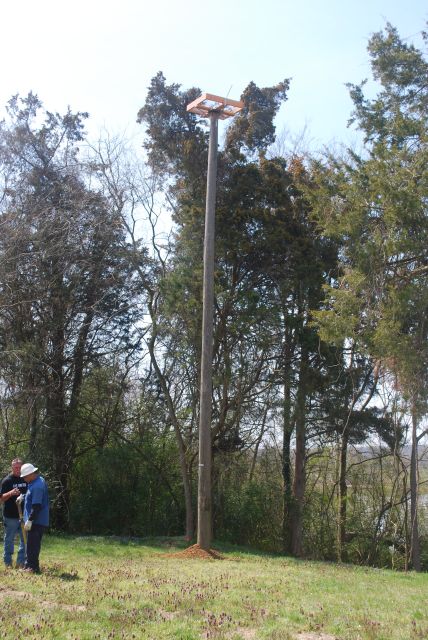 Osprey are a protected bird and it is against the law to kill or harm them. In looking into moving their nest last year, we found out that we could move a nest if there were no eggs or babies in the nest. We could also move the nest, with the help of the Wildlife Fish and Game Agency if the nest posed a threat to the structure. We miss the chance last year as Dolley laid her eggs early. Generally from the time they arrive, you have until April 15th to get the nest moved.

This year, Dolley and James decided to change chimneys. They moved from our Formal Dining Room chimney to the Parlor chimney. This isn’t a good thing. Since they have been nesting on the Formal Dining Room chimney, the chimney has seen some damage to the seal, which allows rain to come in. It also creates a mess on the roof. As they build their nest, Dolley and James will bring one stick at a time to the area. They will hover over the nest and drop the stick. It is stays on the nest, they will arrange it as they choose. But if it drops and falls to the roof, they don’t pick it up and try again. They go and get another stick. Also if the wind picks up and blows the nest off before it has enough weight from the sticks, they don’t pick it off the roof and rebuild. They go find more sticks. So we end up with tons of sticks on the roof. Another issue comes once the babies arrive. Because they don’t fly right away, they have to relieve themselves by backing to the edge of the nest and shooting it out on to the roof. That is a mess! 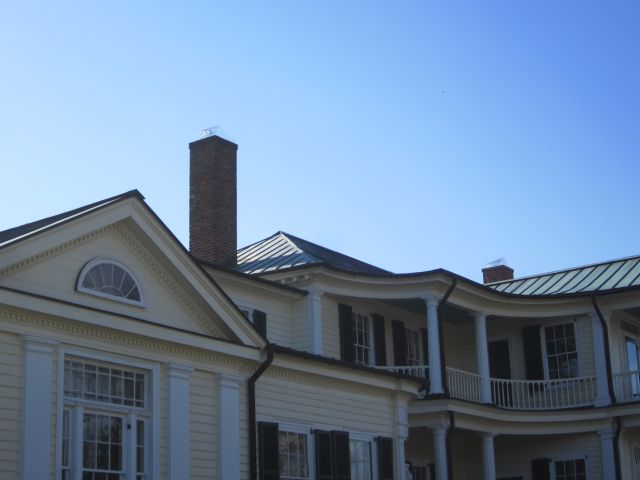 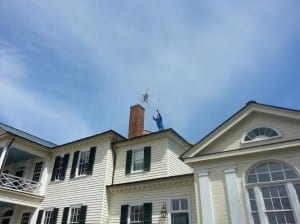 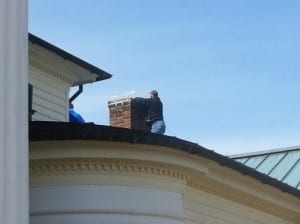 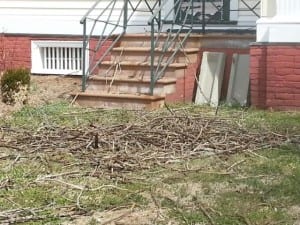 So this season, we are moving them out. We had two people come yesterday to remove the new nest and the debris from the old nest. They placed a temporary cap on each chimney to keep them from nesting again. While they were removing the nest and debris, you could hear Dolley protesting. She didn’t try to attack them, but you could tell she wasn’t happy. 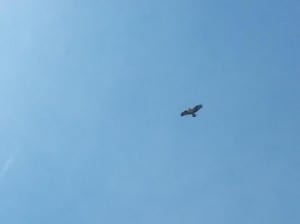 By the afternoon, hours after the nest was removed, you could see her flying over and around the mansion. She even tried to place more sticks on the temporary cap. But what she place just blew off. This morning, there were more sticks on the cap, but by midday, the sticks were sliding off again. 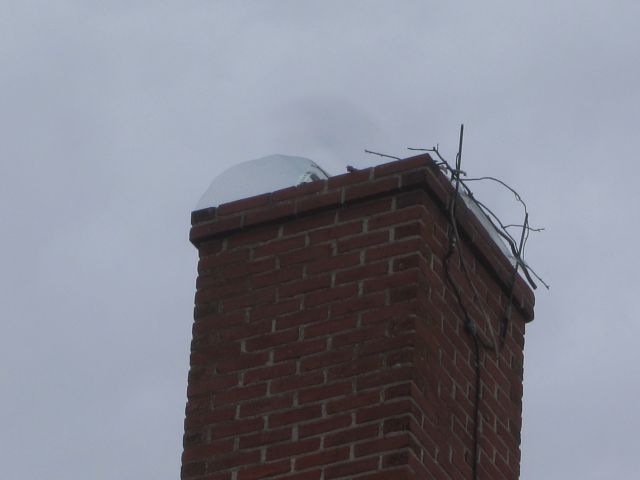 This has been a traumatic week for Dolley and James. Just two days ago, I saw James on the ground, just standing. He didn’t move around much. But when I walked over, he would fly away, keeping low to the ground. Then he would return later. Just an hour after he returned to the area, just standing there, Dolley joined him. Again I walked over to check on him. I was concerned that he may have gotten into a fight with an eagle and was injured. Again he and Dolley flew off, just a few yards away and again landed on the ground and stayed there. The following morning, I checked for him again. Not seeing him, of course I worried that maybe he didn’t make it. But thankful today, I have seen both flying around, so he seems to be okay. Brett said that he must have gotten some bad sushi. 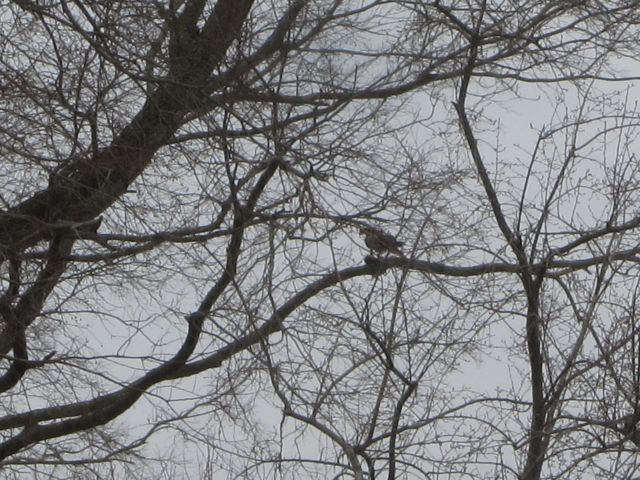 Today, Dolley has be protesting and flying around. She did find a tree to stop and eat some lunch in. James joined her a short time later. But so far, no sticks on the caps. Yesterday, we did see her land on the platform. So they know its there. I guess they just haven’t put two and two together yet. But we are hopeful. We would hate to see them leave or not mate this season. 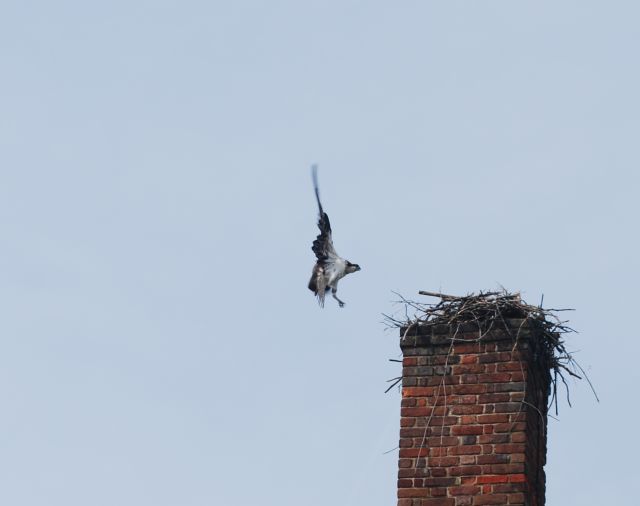 We will keep you updated on their progress. Check our Facebook for updates too.