From the Freelance Star on Monday, March 17th 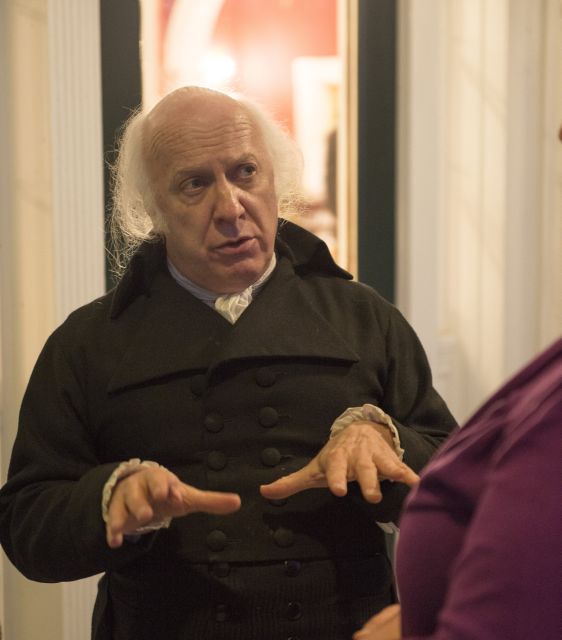 John Douglas Hall begins each morning as he has for nearly 30 years—by immersing himself in the life of James Madison.

The Stafford County man, who resembles the fourth president, peruses the same gazettes, correspondence, military reports and other works that Madison would have read on that day exactly 200 years ago.

“I read what he read to prepare for his work,” said Hall. “I think it’s fascinating to learn history this way. Every day is a new day.”

Hall is an historical performer, and his daily practice is the basis for his appearances as Madison at historic venues, judicial forums, leadership conferences and anniversary events across the country.

This past weekend they included a “Happy Birthday President Madison” dinner on Saturday with Lynn Uzzell as Dolley Madison at Belle Grove Plantation in King George County, where Madison was born; and a commemoration of the 263rd anniversary of his birthday Sunday at Montpelier, his Orange County home.

Hall doesn’t use a script. Instead, he brings the founding father to life by talking about him in context of his day two centuries ago. That approach, he said, makes him unique among that handful of people who portray the Madison and his life.

And what a life he had! Madison was instrumental in the drafting of the U.S. Constitution, was a key champion and author of the Bill of Rights, supervised the Louisiana Purchase as Thomas Jefferson’s secretary of state and succeeded Jefferson as president. He served two terms from 1809 to 1817 before retiring to Montpelier.

Hall said he’s spoken at many symposiums dealing with the anniversary of the War of 1812, focusing on the issues that led up to the rematch with Great Britain.

“There were war hawks in Congress, issues of an international nature, relationships with the French and Spanish ministers to the United States,” he said. “It was almost a case study of how the government proposes to handle these issues. What’s unique is that there was no precedent for them.”

Madison was adamant at that time that there be no suspension of the Bill of Rights, no prevention of public assemblies and no Alien and Sedition Acts, Hall said. The president also showed up on the field of battle in 1814 with several members of his Cabinet.

“Not many know that he went to the front lines,” Hall said. “There are a lot of things that historians put out that are not true.”

He said he’s particularly disturbed by comments that some of Madison’s cabinet appointments were incompetent.

“Admittedly, he didn’t have much administrative experience, but not many people did,” Hall said. “When you go day by day, you get a better picture of how and why he made the appointments. He might not have had better alternatives.”

Hall traces the start of his career as a Madison historical performer to March 1987, when the National Trust for Historical Preservation first opened Montpelier to the public. At the time, Hall was portraying a 28-year-old Connecticut gentleman farmer of 200 years ago at Gadsby’s Tavern in Alexandria.

People from the National Trust had seen him there and knew his height was about the same as Madison’s. They asked him to portray the man Dolley Madison once referred to in a letter as “the great little Madison.”

He said he was a little reluctant to accept the Montpelier appearance at first because he was doing fine at Gadsby’s. Soon after his appearance as Madison, however, he began receiving invitations to appear at a variety of bicentennial events.

At first, most wanted Hall to do a survey of Madison’s life or talk about the British burning the Capitol building in 1814. Now he’s more likely to be asked what Madison would think of today’s hot-button issues, such as separation of church and state and the United States’ international obligations.

Hall said he refuses to second guess Madison because so much has changed—from precedents set by prior administrations to our perceptions of the country’s obligations. Instead, he discusses Madison’s perspectives on similar issues of his day.

“Madison had a remarkable confidence in the American people, and I do, too,” Hall said. “For all the vitriol cast today, it’s not nearly as hostile as in the 1790s. People are very upset today about the lack of virtue and camaraderie in Congress. It was much worse in Madison’s day.”