Last week on Thursday, I took off on another adventure. This time, I was invited along on someone else adventure. My friend Tamara and his boyfriend Sam were going to see a Bed and Breakfast in Flint Hill, Virginia called Caledonia Farm 1812. Tamara is a Wedding Officiant and owner of No Ordinary Ordained. She has also become a very good friend and great sounding board. She was traveling to meet the owner, Phil Irwin and to talk about adding his location to her possible venues for weddings.

It was a beautiful ride! We didn’t take any of the real highway and got to see a lot of the back roads of Virginia. Caledonia Farm is at the base of the Shenandoah National Park and Skyline Drive. As we got closer, you could see rolling hills for miles!

It was just amazing!

When you pull into Caledonia Farm, you are greeted by this wonderful, old stone house sitting up on a small hill with field stone walls lining the driveway.  Just behind the house is a red barn and fields filled with cows. Beyond the fields is the upward slope of a rolling hill. We were greeted by Phil and Tamara introduced me as a new Bed and Breakfast owner. Phil quickly said, “Well come on in and sit down. Let me talk you out of it.” I kind of laughed. But he was serious. He explained later that he had been in the Bed and Breakfast Industry for 29 years. During this time, he served as the President of the Virginia Bed and Breakfast Association. He had met many new bed and breakfast owners and listened to their hopes and expectations. He said most new owners expected to have 50% occupancy their first year and then 100% their second year. I have done some research on this at the beginning and learned that most new bed and breakfast businesses start around 30 -35% their first year and that the national average is 47% after the first year or two. So no unrealistic expectations here. He also told me that most bed and breakfast businesses don’t last more than 5 years. He said that most owners quit after 5 years because they get tired of having people in their house and they are tired of giving up their weekends or want to travel.

After he welcomed us into the house, he showed us around. The first stop was the breakfast room he had off the back of the kitchen. What a view to enjoy breakfast by! It is a small triangle table for two in front of a picture window with a view of the rolling hillside. I would have a hard time finishing breakfast and leaving!

Our next stop was the kitchen where he keeps all the area attraction brochures. I couldn’t help but notice a brochure for Belle Grove Plantation in Middletown, Virginia. Remember this is the home of James Madison’s sister Nelly Madison Hite. This Belle Grove was named after our Belle Grove. 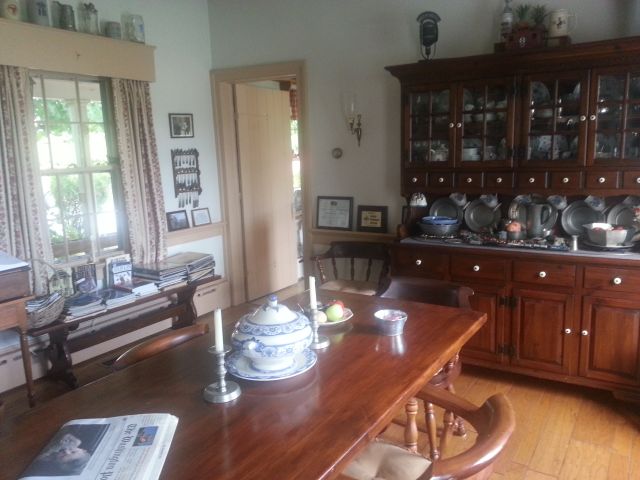 Then we headed to the dining room. Here Phil quizzed us on a portrait hanging in the room.

Can you tell who it is?

It is a portrait of a young George Washington.

We headed into the living room where Phil told us that we had entered into the 1812 portion of the house. Here he pointed out books, furniture and architectural details. One furnishing he pointed out was a desk. He was unsure of the place of origin or the maker. He has been trying to find out, but has been unsuccessful so far. Does any one else know?

He then pointed us upstairs to the bedrooms. One point he showed us before climbing the stairs was the “House Mouse”. This mouse is a bronze mouse, but the sealed hole was a real mouse hole! Phil said that the mouse was painted grey before when he purchased the house and that several guests had screamed when they saw it on the staircase!

Upstairs are two rooms filled with wonderful old pieces of furniture. What I loved about it all was that there wasn’t any fancy bedspread on the beds. Just wonderful old quilts. You can just image people snuggling up under the blankets to guard against the cold and snow. 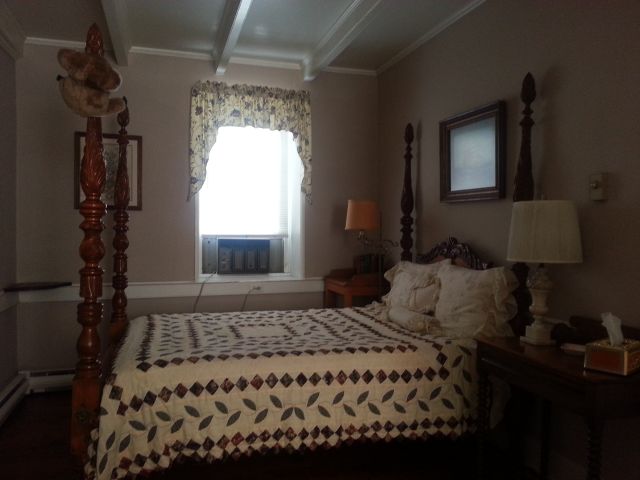 There is just one bath and a small “library” in the hall. I had to laugh when I saw the phone. Who knew that as an adult, the dial phone would now look like an antique! 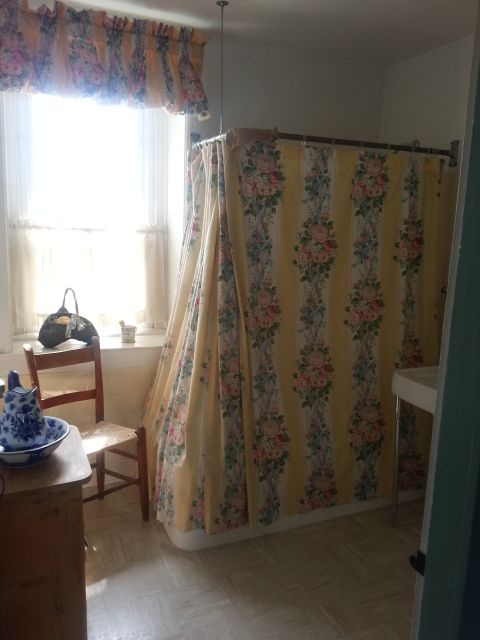 After our tour of the house, we headed out to see the outbuilding. It is attached by a covered walkway to the main house, but only accessible by going outside and around to it. It is a small summer kitchen. Like most houses built during this time period, kitchens were built away from the main house. Kitchen fires were common so losing a Summer Kitchen would be better than the whole house. Inside we saw a wonderful old fireplace. The room wasn’t much bigger than our Summer Kitchen here at Belle Grove. But this kitchen had a staircase that went up to a small loft. We have a laundry attached to ours with a loft that slaves would have had to climb a ladder to get to.

After the Summer Kitchen, we head back down the walk to the basement of the main house. Here Phil has set up one amazing train collection! When you walk into the room, you first catch the fireplace. 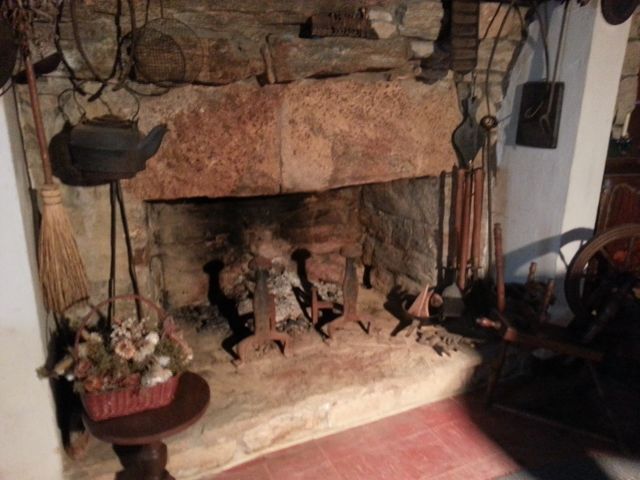 It was just amazing the condition this fireplace was in! Built in 1812! Wow!

Phil, Tamara and Sam standing and admiring the fireplace.

As you turned around the room, you saw pictures from Phil’s past. The first one we saw was a newspaper article that told how Phil had been named “Citizen of the Year” for his work in conservation. He has work hard to conserve the Virginia Countryside from over developing and better practices to keep Virginia beautiful.

The next picture was an advertising poster from Voice of America Breakfast Show! Phil comes from a career in broadcasting including Armed Forces Radio in Europe and Voice of America in Washington D.C. He has traveled to 49 countries and all 50 states!

The next thing to catch your eye is his scale model train set! Hundreds of feet of train tracks run in and round his basement with scale cities along the tracks. It is just amazing to see! 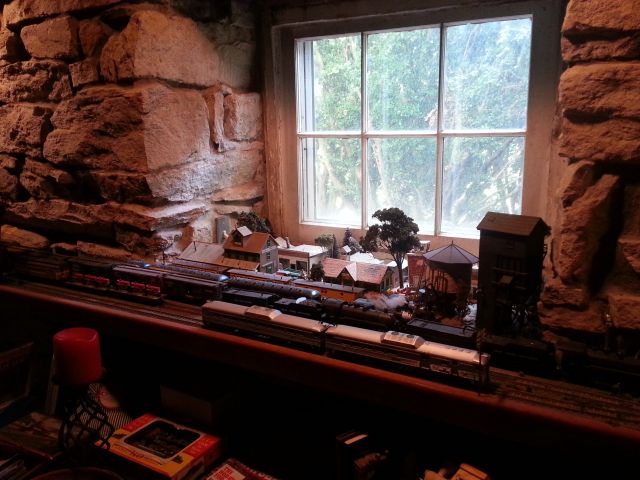 After the tour, we sat and talked in the walkway for a spell. Here is where I told him about our Belle Grove and what we have been doing to get ready. He asked me if I had looked into the Virginia Bed and Breakfast Association yet and I told him that we were already a member. He was pleasantly surprised. At the end of our conversation, I got the feeling that he thought we were on the track and that we would do okay. 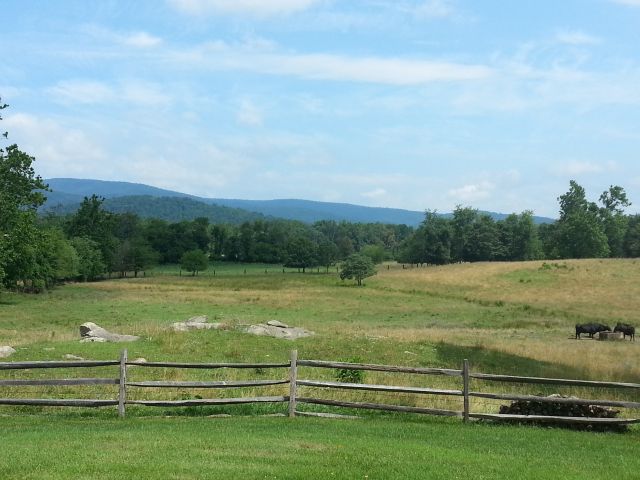 We headed back to cars and I got to get a good look at the fields and cows. I am not really a country girl so anything country amazes me. It was so cool to hear the cows mooing and to see them meander up the side of the hill to another area in the fields. I have to say, it is so peaceful there just like Belle Grove. It would be easy to go and relax and not do anything for a few days. Okay maybe adventure to an antique store or two. But what a magnificent place to come home to!

Thank you to Tamara and Sam for including me on this wonderful adventure and allowing me to meet Phil!

It was worth the drive!

To see what we are up to at Belle Grove Plantation