A tree with a history falls in King George

With a sharp crack and a ground-shaking thud, a massive mulberry tree crashed in front of James Madison’s birthplace in King George County on Wednesday. 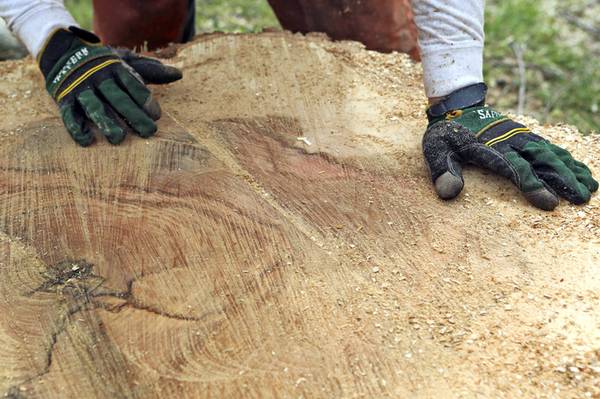 “It’s 180 years old, maybe more,” he told Michelle Darnelle, who plans to open Belle Grove as a bed-and-breakfast by the end of May. “I’ll have a better idea when I make another cut.”

Darnelle had hoped that the tree was around when Madison had at least visited the plantation, which was the childhood home of his mother, Eleanor Rose “Nellie” Conway. The  house  there at the time  burned shortly after his birth.

“It would have had to be 262 years old to have been here when Madison was born and 223 years old for him to have walked by this tree,” Darnelle said.

Madison’s grandfather, Captain Francis Conway, sold the plantation in 1790 to John Hipkins, who built the center section of what was to become a handsome white frame mansion on the earlier foundation in 1791. Madison probably never visited after the sale, she said.

Tierney still wasn’t sure of the tree’s age after slicing another section from its stump, but could tell that it had been deliberately planted near the house’s circular drive because it wasn’t an indigenous variety.

He and his crew also found evidence that someone long ago had gone to great measures to save it. Not only did they find a cable that had been wrapped around the tree to hold it together, but they also turned up chunks of concrete and a piece of rebar that had been inserted in a rotting section of the trunk.

“It must have been a significant tree for someone to have made that much effort to save it,” said John Crosson of Fredericksburg, who is part of an area woodworker’s guild. Members will turn usable sections into furniture and other objects such as fountain pens.

The mulberry was one of three damaged trees that Darnelle had felled and removed on Wednesday. One was an ash that had lost much of its top in two storms. The other, a red maple, had a honeybee hive occupying its hollow core.

Mot’s left the branches on the maple to help cushion its fall and used a chain saw to free the section containing the hive.

“When they come out, they’re going to be on the angry side,” warned master beekeeper Bob Wernsman of King George. “They’re trapped and they’re disoriented.”

Donning beekeeper hats and veils, he and his wife, Darlene Wernsman, spent much of the morning removing waxy combs filled with honey and larvae as they searched for the queen. They were able to get the bees into a wooden hive, which will be located on the bed-and-breakfast property. Darnelle plans to use their honey in the various recipes she plans to make for guests.

She burst into sobs after Tierney cut a wedge in the side of the mulberry facing away from the house and then toppled it by sawing through the other side. She said she hated to lose the tree, but feared that a storm would eventually knock it into the historic old home.

“I had to weigh between the tree and the house,” she said. “The house won.”

J.C. Forest Products, Inc. in Spotsylvania County will mill salvageable, 10-foot sections of the tree and cure them. The woodworkers’ guild, which it sponsors, plans to use it to craft a table or similar piece of furniture for Belle Grove.

Smaller sections of that tree and the other two will be used to make pens that the Belle Grove Foundation will sell at the mansion to raise funds to restore three outbuildings.

The Historic Pen Company in Manahawkin, N.J., which helped Darnelle locate J.C. Forest Products, also will get a three-foot section.

She and her husband, Brett Darnelle, are leasing the house and 7 acres from the foundation for their bed-and-breakfast operation, Belle Grove Plantation. It features two junior suites and two master suites, all of which are named for the families that lived there.

The Darnelles also hope that the house will be used for special events, such as weddings, and have a handicap-accessible entrance so that those in the military who have been wounded can come there with their families after rehabilitation.

Thank to Cathy and the Fredericksburg Free Lance Star for coming out and covering us as we made history. It was a great article and I enjoyed our time together talking about the plantation!

Did you vote yet?