Last Saturday, we allowed someone to come to the plantation to do a little metal detecting. We don’t normally allow this, but because we are about to grade the grounds, we were worried we would lose or even damage priceless artifacts.
We do have a “No Trespass” rule for metal detectors on any parts of the 694 acres. We fear by allowing others to come, we would lose valuable artifacts and wouldn’t know where they came from.
We didn’t know what we would find and the individual we allowed on the plantation agreed to leave all the items with us.
What an adventure it turned out to be!
We have asked him to please write a guest blog for us talking about his adventures in Virginia.
We hope you enjoy!
Saturday was the continuation of my three state relic hunting expedition.
Now, before I go any further I am going to put out this disclaimer to all.
This relic hunt was a one time deal. The only reason that I  mention the location is because they will posting a similar post on their blog site. The property is clearly marked “No Trespassing” and the proprietors do not, and will not permit, anyone to access the grounds for relic hunting purposes. I was provided this one time opportunity to relic hunt here only to provide the home with relics for them to display to guests that will visit there. I repeat: The proprietors do not, and will not, permit anyone to access the grounds for relic hunting purposes. Please respect their wishes.
Okay, back to the day’s hunt.
Mama Bear had done a lot of leg work and communication with the proprietors of the Belle Grove Plantation in Port Conway, VA
( http://virginiaplantation.wordpress.com/ ), which was the birth place of James Madison. I cannot thank my wife enough for what she did to make this happen. The plantation house has been converted into a guest house of sorts and I was more than happy to help them in their quest to find relics related to the plantation.

Upon arriving, I met with the proprietors, Michelle, Brett and their son Tyler. Both Michelle and Brett had been in the military so we chatted about our experiences. Brett was retired from the military and, like myself, did not miss it. Michelle took me for a two hour tour of the house and grounds, to include the slave quarters, smoke house and ice house. I will come back to these three buildings later. While it may seem like a long time, it actually flew by. I was shown area’s that guests will never see. It was an amazing tour to be given and I am very grateful for the experience.

After my education into the history of the plantation I was free to hunt the grounds. Now back in the 1980’s this place was an abandoned property and, from the large number of 40oz beer bottle screw caps I was digging up at first, it showed. I moved to the area between the slave quarters and ice house and things started looking up… 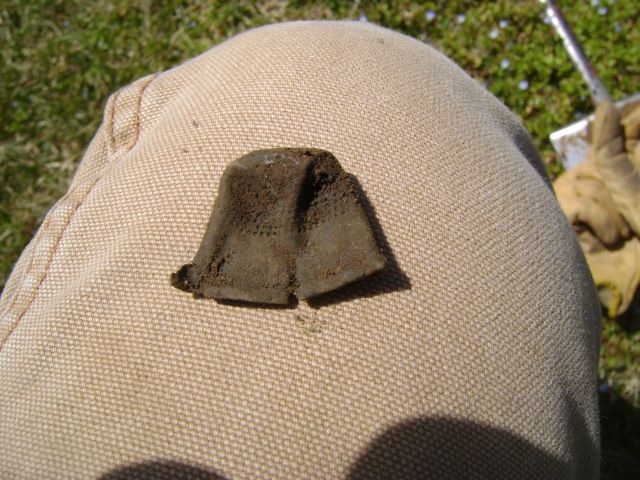 I dug up this flattened thimble at about 6 inches deep. 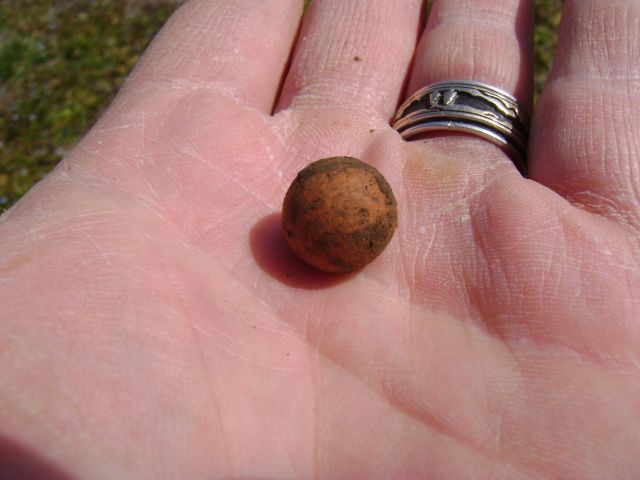 Shortly afterwards, in the same area, I found this clay marble. Okay, I can hear the questions. How did I find a clay marble with a metal detector? Actually I was digging a signal and sitting on top of a piece of rusty iron was this marble. To think that a child, who likely grew up to adulthood and has long passed, was most likely the last one to touch this marble really brings a personal touch to this hobby.
I moved to the area in front of the plantation house and found more relics.

The old folding knife still had part of the wood furniture on it.

I found two Civil War era Minie Balls. The one on the right was found less than a foot from the steps to the front of the plantation house. For Michelle, this really reenforced her belief that the Union forces used the house as a headquarters during the Civil War.
And now the best for last….

A 1817 Large Cent with 15 Stars ( http://www.coinfacts.com/large_cents/matron_head_large_cents/1817_large_cents/1817_large_cent_n16.htm . The signal on this was a solid tone and I knew instantly I was not on any trash. I dug the plug out and it was sitting at about 4 inches down. When I saw the coin I made enough of an exclamation that Brett, who was working on a project on the front steps, came running over to see what I had found. We soon had Michelle out there. The date and stars were only visible when the coin was wet and viewed at a sharp angle. The really cool thing about this coin was that James Madison was President in 1817. 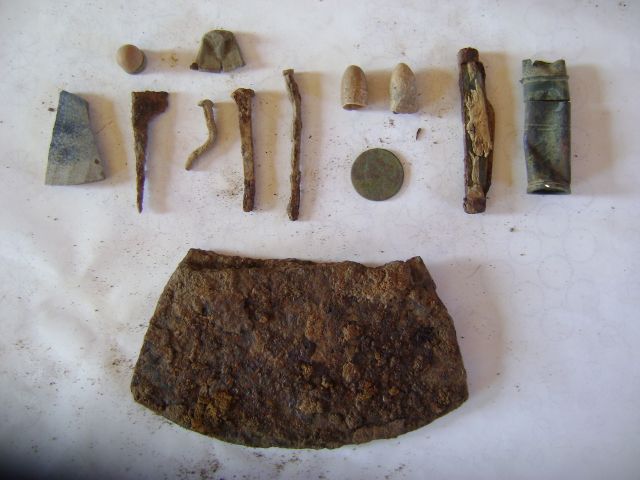 All in all, the day ended up being a success! I also found some period pottery shards, square nails and part of a period garden hoe. Michelle, Brett and Tyler were all very thankful for the service I had provided, for which I was very thankful to have given the opportunity to provide such a service.

I was glad to have helped them in finding some relic to display. 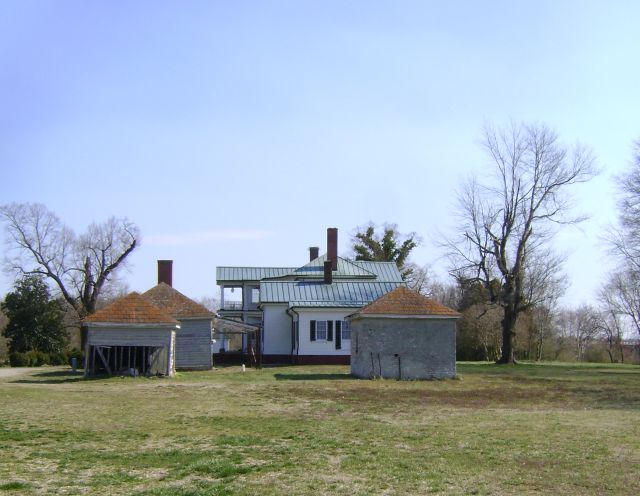 Now back to the Slave Quarters ( http://virginiaplantation.wordpress.com/?s=slave+quarters) that I mentioned earlier. While the plantation house is to be a guest house, there is nothing budgeted by the investors for the preservation of the three outbuildings. Michelle and Brett are both hoping to turn the biggest of the three outbuildings into a walk in museum for guests and visitors, while preserving and restoring the other two buildings back to what they looked like 200 years ago. In the top left of their blogsite is a donate button. All donations go to the cost of restoring of these buildings. If you believe in preserving as I do, then I ask that you make a donation.
Thank you. PB
Brett and I would like to thank Papa Bear for all his hard work and for this wonderful post!
And to thank Mama Bear for reaching out to us from our blog to arrange it for him!
We will soon have more pictures for our day of hunting on Facebook!