But I wanted to share them with everyone else!

We have added two new dishes to our Breakfast Menu! 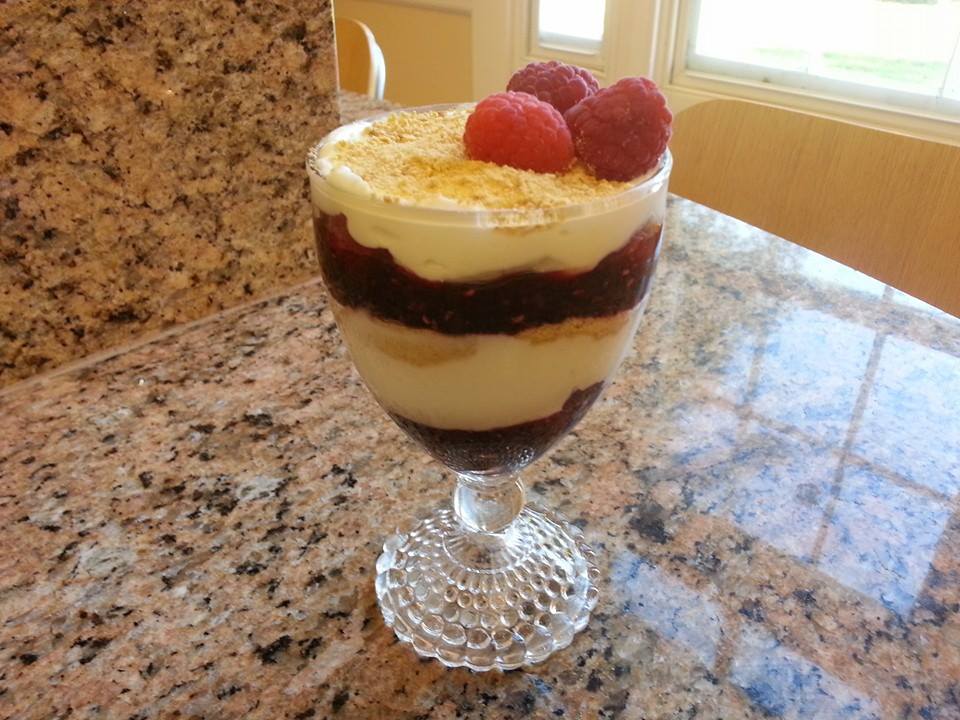 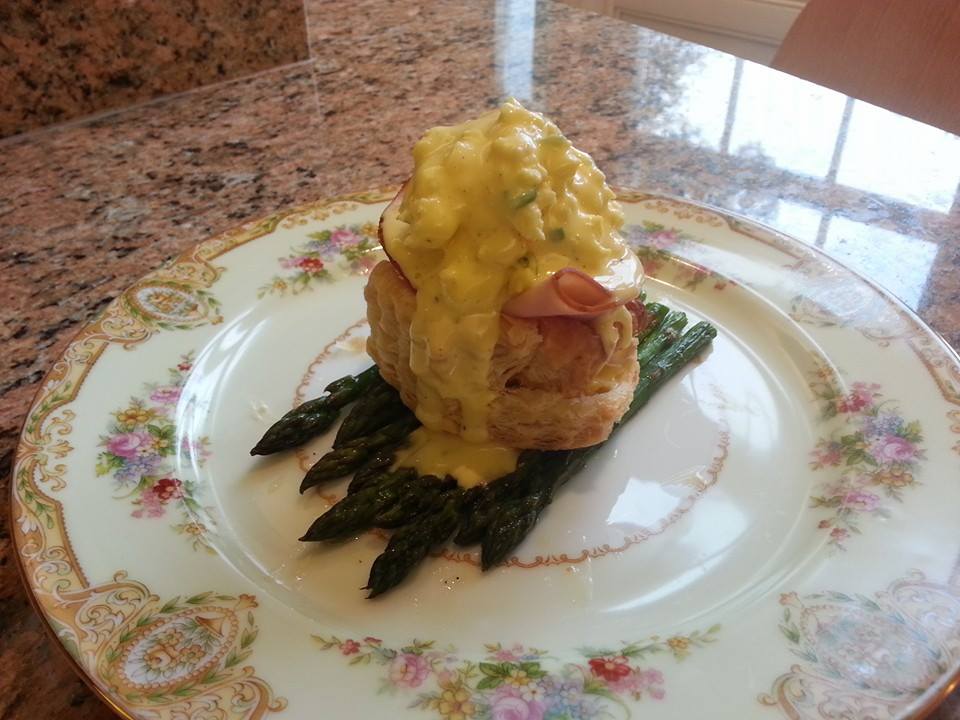 This is an twist to the traditional Eggs Benedict. It is Cream Cheese and Scallion Scrambled Eggs and Virginia Ham in a Puff Pastry Shell seated on Roasted Asparagus and topped with Fresh Hollandaise Sauce.

To see more of the dishes we prepare, you can check out our Breakfast Menu on our website.

Posted by Michelle Darnell | in Darnell History, Food and Recipes | Comments Off on New Breakfast Dishes

Inspirations from other great minds

This morning, I prepared a dish that I found while reading some of the blogs I follow.

(yes… I finally have a moment to read…)

This dish came from urbancamillia and her blog post

I started with a Maple Baked Apple and then presented my take on her dish,

Bacon and Cheese Crepe on Asparagus, topped with a Poached Egg and Hollandaise Sauce

It was really good!

I am sorry but I didn’t get a shot of the Maple Baked Apple.

It went to the table before I could get a shot. Next time!

Thank you Urbancamillia for inspiring me today! 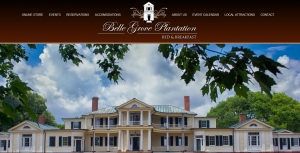 For tonight’s appetizer we are serving

To see more foods we serve at Belle Grove Plantation 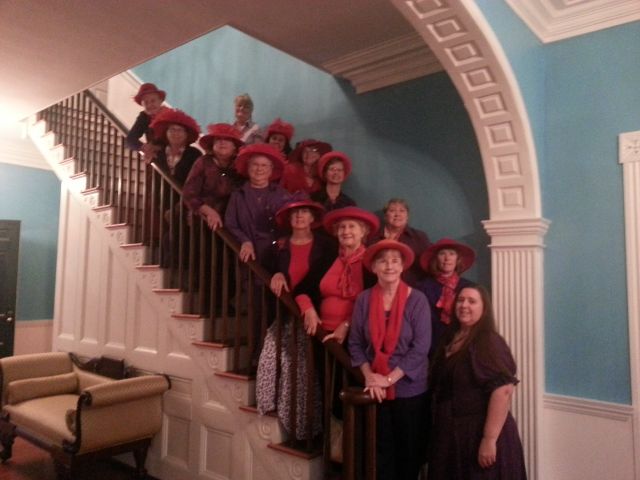 For coming to see us at the plantation!

It was just wonderful to meet each of you and we look forward to having you back soon!

Belle Grove Plantation would like to thank the ladies of

The Victorian Society at Falls Church

(a medium group of collectors)

(large group based out of PA)

For coming to see us at the plantation!

It was just wonderful to meet each of you and we look forward to having you back soon!

Not only do you get an elegant breakfast at Belle Grove Plantation . . .

But you also get a scrumptious appetizer before you head out to one of our outstanding local restaurants!

On tonight’s menu was

Oyster and Virginia Ham in a Puff Pastry Shell

This appetizer recipe came from a “Taste of History” with Chef Walter Staib from PBS.

What’s Cooking at the Plantation today?!

I have been sharing photos of some of the breakfast foods we have been making, but completely forgot to share it here!

So here is what we have cooking today at the plantation!

This morning is a colorful one!

We started with Green Tea and Mint Infused Cantaloupe 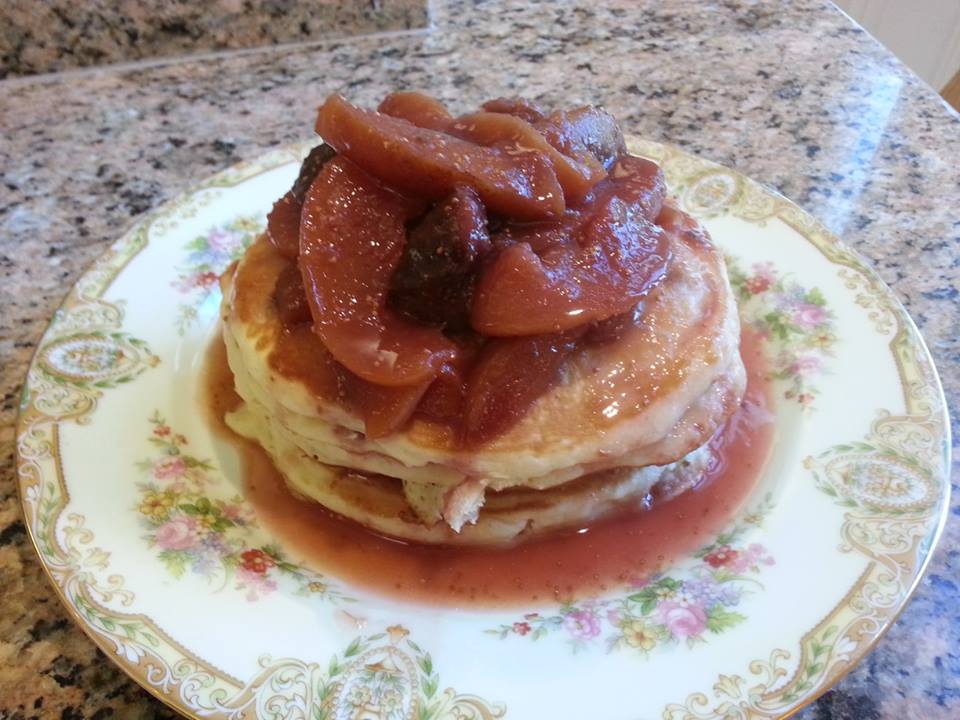 Followed by Homemade Blueberry Pancakes with a Peach and Fig Syrup!

To see more of the foods we have on the menu

and look under our Breakfast Menu!

Today, Belle Grove was buzzing like a busy bee hive!

We had several deliveries as well as a number of visitors!

But most important we have finally received one room of curtains!

If you have been following the blog, you know we have been working on getting curtains forever! Okay not forever, but it sure feels like it! We received the Madison Master Suite curtains for the main bedroom and the Master bathroom. We didn’t get the tie backs and the canopy, but not to worry! Those will arrive on Tuesday! 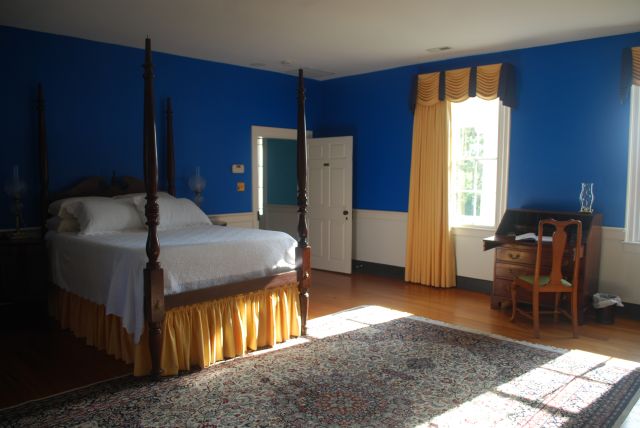 Besides the curtains, we received the rug we won at the auction last week!

This Settee is one of two that we bought for the Grand Hallway. This one will be downstairs, When we receive the other one, it will grace the upstairs Grand Hallway! 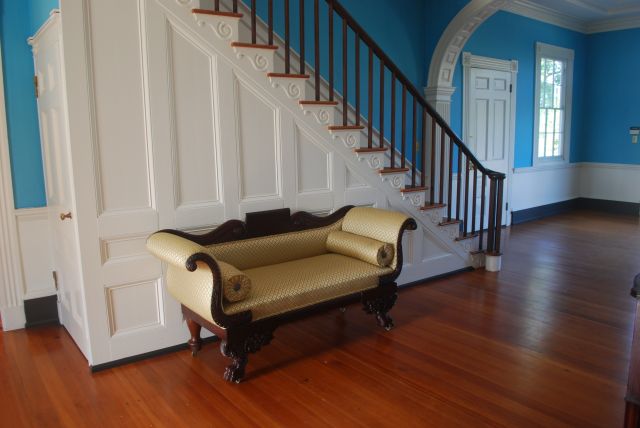 I think it looks quite nice beside the stairs and will make a wonderful place to rest as people come to see us, 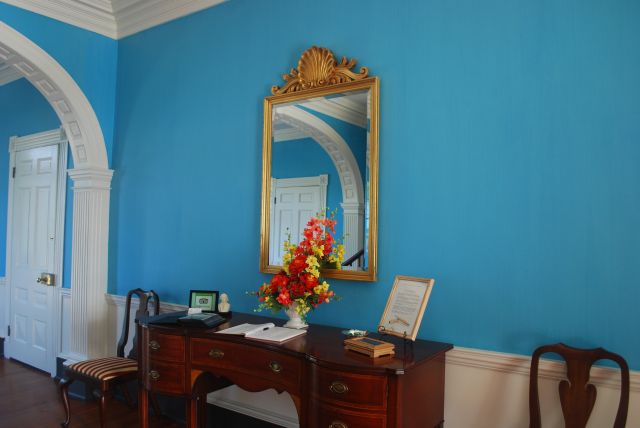 This is a mirror we received a week ago, but just got it hung today in the downstairs Grand Hallway!

The Parlor got a number of new pieces!

This is the fan we won at auction last week! 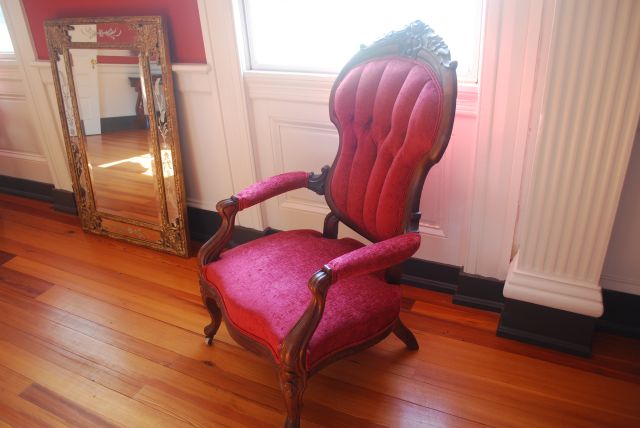 We also received two Victorian Chairs for the Parlor.

We received our other rug from the auction that is now in the Hipkins-Bernard Junior Suite Sitting Room.

We also added some items to the upstairs Grand Hallway. These are two candlesticks and hurricanes that I found on my shopping trip last week.

And this is the table we won at auction last week! 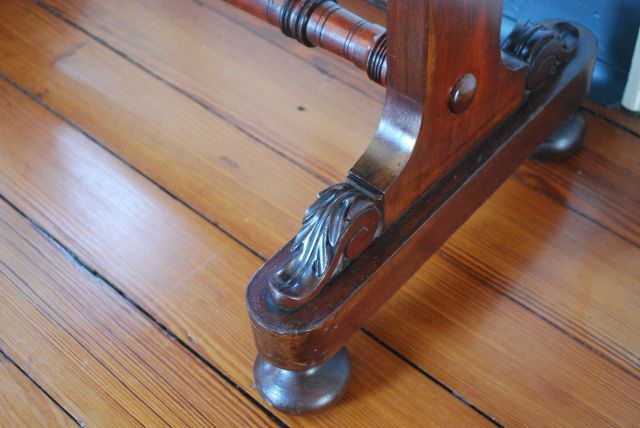 I love the feet on it!

It reminds me of the scroll work on the riverside portico stairs! 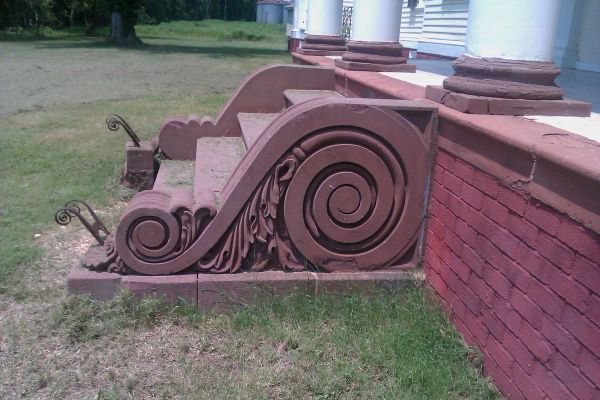 I really think it is starting to feel more like a home than every before!

When the ladies were hanging the curtains in the Madison Master Suite,

This needle fell out from behind one the woodwork around one of the windows!

Its about three inches long and has a large eye,

To see more of what is going on at Belle Grove

It was a “Red” Letter Day at Belle Grove Plantation!

We appreciate your group coming to see us at Belle Grove Plantation!

As most of you know, I love auctions! And this one has really got my attention!

I was notified by a private individual, who has been following our blog, that she has an auction I might be interested in.

One part of our history really caught her attention, that of Thomas Lomax Hunter. Thomas Lomax Hunter was the grandson of Carolinus Turner, the gentleman planter who owned the plantation from 1839 until his death in 1876. Carolinus was responsible for the architectural changes that took Belle Grove’s mansion from the simple Federal plantation house to the grand Greek Revival mansion that it is today. Thomas’s mother, Susan Rose Turner, known as Rose Turner, was born here as was her son, Thomas. Thomas would later go on to become a Virginia State Poet Laureate.

This individual is in possession a number of original copies of poetry, signed photographs, book, newspaper clippings and one unpublished poem. She has recently put these items up for auction on ebay. She was kind enough to notify me of this auction. Sadly, the starting bid is well out of our price range right now with all the purchases we still need to make to complete the mansion.

Below is the information from the ebay auction of the items.

ONE UNPUBLISHED – UNTITLED – THIS IS THE ONLY COPY IN EXISTENCE, THERE WILL NEVER BE ANOTHER

IT BEGINS…  “FAR OVER A SEA OF AZURE BLUE…” (BEAUTIFUL POEM! YEARNING FOR LOST PLACE, YOUTH, LOVE.) “…THE ISLAND OF LONG AGO.”

INSCRIBED AND SIGNED BOOK – COLUMNS FROM THE CAVALIER (RICHMOND, VIRGINIA; THE DIETZ PRESS, 1935

BIO AND INVENTORY LISTED BELOW

(I photographed these by starting with a few and adding to the pile.)

Hunter, Thomas Lomax, lawyer and poet, was born in King George County, Va., Mar. 6, 1875, son of Frederick Campbell Stewart and Susan Rose (Turner) Hunter and a descendant of James Hunter, a native of Scotland, born there in 1661, who immigrated to Virginia. . . . His father, a judge, served in the rank of captain in the Confederate Army during the Civil War. After receiving his preliminary education with private tutors, the son attended William and Mary College and Georgetown University, where he studied law. Admitted to the bar of Virginia in 1908, he began practice in King George and continued there independently until the close of his life. Outside of his legal activities, his influence was felt in Virginia through a column, “As It Appears to the Cavalier,” which he contributed to the Richmond Times-Dispatch from 1929 until his death. Concerned with state and national affairs, a selection of these writings was published in book form as “Columns from the Cavalier” in 1935. He was a frequent contributor to literary magazines and was best known as a poet. . . . In 1948 he was named poet laureate of Virginia by the general assembly. In 1918 and 1920 Hunter represented King George and Stafford counties in the Virginia House of Delegates, where he supported the causes of woman suffrage, improved roads, compulsory education, and higher education for women, and opposed prohibition. During the First World War he served as food administrator for King George County. . . . Gardening and farming were his chief recreations. . . . He died in Fredericksburg, VA., June 19, 1948.

Columns from the Cavalier (Richmond, Virginia: The Dietz Press, 1935)

Please take a moment to view her auction.
http://www.ebay.com/itm/221284902699?ssPageName=STRK:MESELX:IT&_trksid=p3984.m1558.l2649
It is my hope that someone will be able to purchase these items and at least return them to King George, Virginia. I am sure the King George Historical Society would love to have them as much as I would. It would be so nice to have something that belonged to one of our residences back at the plantation.
To see more about Belle Grove Plantation and to view upcoming Events
Please visit our Official Website Site at