You know as we draw closer to opening, the more exciting things become! My day started out with a cancelled meeting so I tried to sleep in a bit. Poor Brett called me at 8am thinking I was up only to wake me up. But that was okay because it lead to so much! I started by heading to King George to do some errands. As I drove past a small historic church, I noticed a sign for Tidewater Preservation. I had seen them recently at our little church on what was part of Belle Grove. They are a historic restoration company.

So I decided to stop and see if they could help me with rescuing our outbuildings. I met a wonderful young man who climbed down from a 10 foot tall scaffold to talk to me. He gave me his bosses information and told me that he would call ahead to let them know I was going to call.

When I arrived home, I jumped on the computer to answer emails. One was from a wonderful pastry chef, Karen that I had just met. She owns Cakes in Art. She wasn’t going to be able to make it to our Vendor Fair. So I had invited her to come ahead to meet and talk. She asked if today was open which it was so I set up an appointment with her at noon. I am so glad I didn’t eat much for breakfast!

I first gave her a tour of the mansion and grounds. Then we retired to the formal dining room. The tour took all of 45 minutes, but we talked until 2:30! What a wonderful person she is! And what talent! I can’t wait to see some of her creations at Belle Grove!

As I finished up and walked Karen to her car, I noticed that two gentlemen were wondering around our Summer Kitchen. As Karen left, I headed over to meet David and Frederick. They quickly told me more about our outbuildings than anyone has been able to tell us. 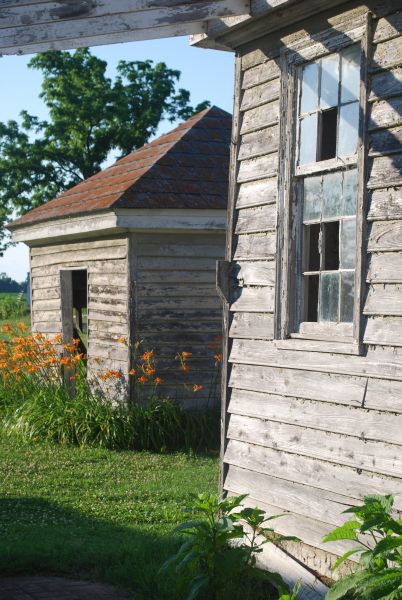 We have three outbuildings or dependencies that have been part of Belle Grove Plantation for a long time. 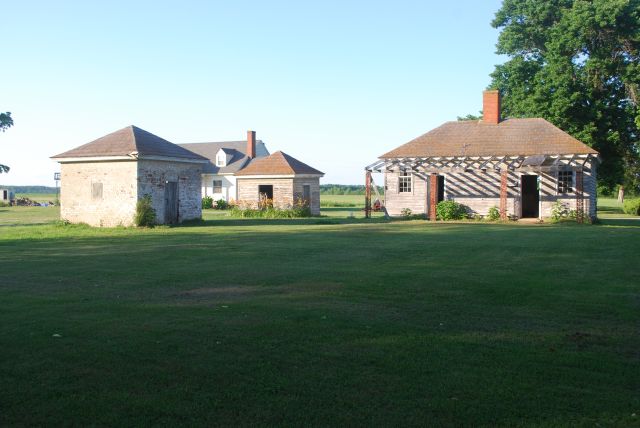 We have an Ice House, Smokehouse and Summer Kitchen. The Summer Kitchen is divided into two parts. One side with its large fireplace is the kitchen side. The other side has a smaller fireplace which I assumed was a Slave Quarters. I have been told that our outbuildings date somewhere in the late 1700s to mid-1800s. The late 1700s would place them there when the main section of the house was built in 1791.

Here is what I learn today!

Tidewater Preservation has some history of its own with Belle Grove Plantation. During the restoration of Belle Grove from 1997 to 2003, Tidewater Preservation had been considered as the restoration company. They had done an in depth study of both the house and the outbuildings. With this past history and looking at the structure, they were able to tell me some really exciting things! 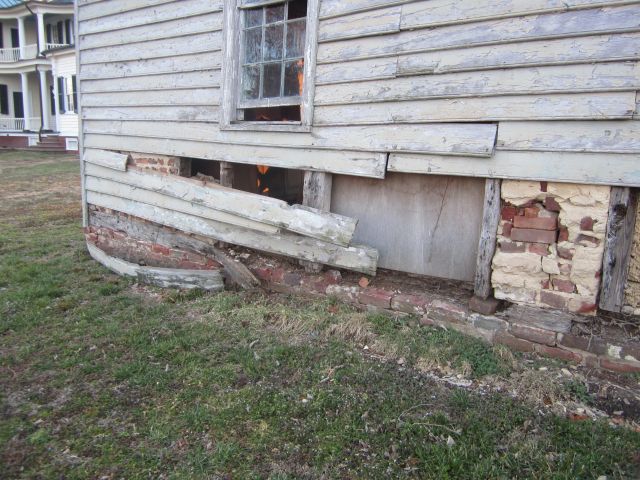 First, the age we had is incorrect. These outbuildings date to 1720 to 1750! They pre-date the house! This is really exciting news because it places them in the time period that the Conway Family owned the plantation! It also places them here when James Madison was born! I was shocked and excited all at once! 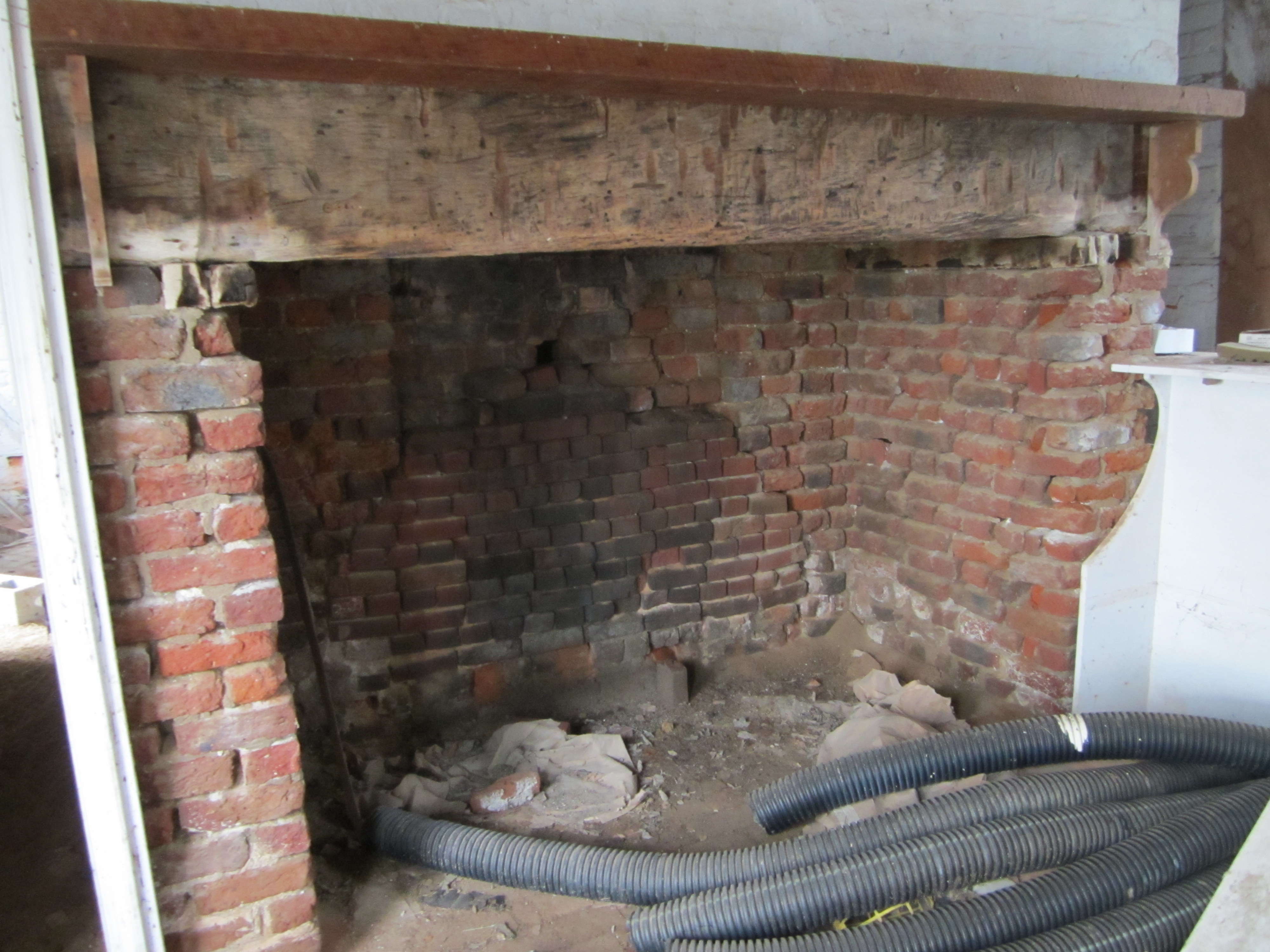 They also told me that what I thought was the Slave Quarters side, wasn’t a Slave Quarter, but a Laundry Room. Then another shocker! The slaves would have slept in the loft above the current ceiling! The last owners have used the Summer Kitchen as a pool house and had enclosed the loft. Oh my what do we have there!! 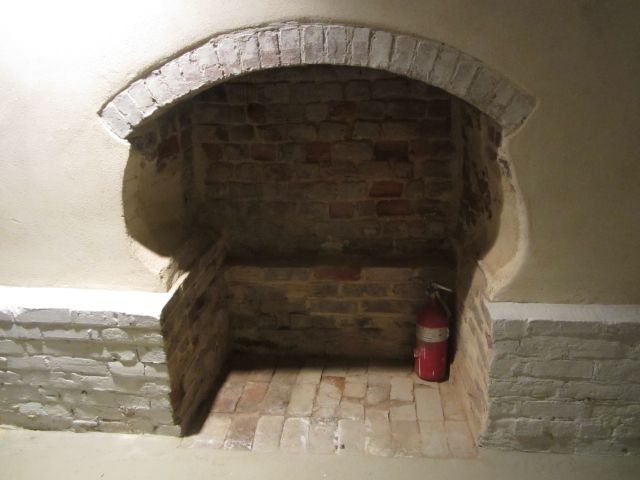 Winter Kitchen in the basement

We moved into the house and they told me about the basement fireplace room. I had at first thought it to be a Winter Kitchen, but was told that it wasn’t. But that slaves had lived in the basement at one time. Frederick told me that before the restoration in the basement laundry room there had been two very large English ovens. That both the Fireplace Room and the Laundry Room had been a very large Kitchen sometime after 1839! My heart was pounding in my chest! 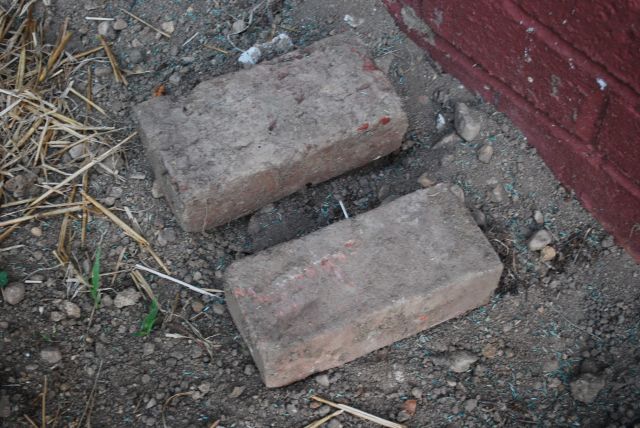 Brick on the top is from the foundation in the south side yard. Bottom is from the 1900 water fountain.

We walked outside and talked about the foundation of the house that was found under the current home, which would have been James Madison’s Grandmother’s home. I had noticed some of the bricks that the handyman guys had removed to place our French drains in on the south end of the house. I knew that the foundation was just under the house at that point and wondered if the bricks he has removed from the yard could have been early enough to be from that foundation. I had noticed that they were bigger in length and width from those we had pulled from the 1900 fountain. When I showed it to them, Frederick confirmed that they were man made and date to the early 1700s!!! In my hand, I was holding a piece of the house that Madison was born in!!!

My day couldn’t have gotten any better… or at least that is what I thought!

Around 4:30 this afternoon, as I sat at my office, looking out the window typing and watching our Bunnies here at Belle Grove run around, laying in the sun and eating sweet grass, I noticed a big brown truck approaching.

Yes! It was the UPS delivery truck!

I ran to the front door only to stop and run back to grab my camera! 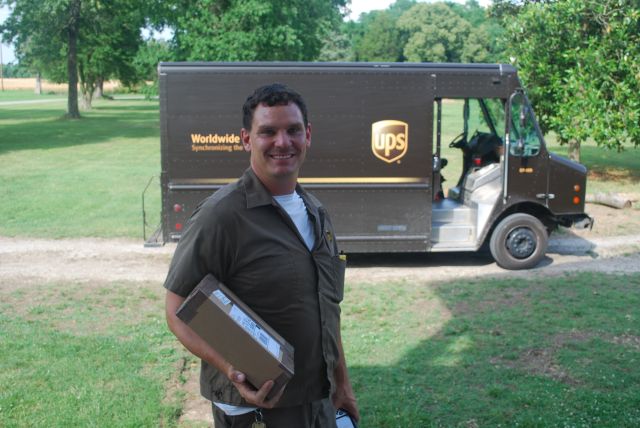 It was our first delivery of books for the library! I asked the driver if he would mind if I took a picture. I wanted to remember this and share it with you! I bounced back to the office and waited until Brett called to open them!

Now we received our first donation of books on Saturday from some dear friends, Glenda and Baxter in Chesapeake. We can’t say how much we appreciated all of them! And now our first delivery to the house! We really are starting to feel like this is real! But thank you to Linda and Richard of Alexandria, Virginia! You made my day even more special!

If you have any books you would like to donate to Belle Grove Plantation’s historic library, please mail them to:

We really appreciate the donations!

So here is the up dated book list we have so far!

A Slave in the White House – Elizabeth Dowling Taylor

The Debate on the Constitution – Bernard Barilyn

Places I Have Known Along the Rappahannock River – Beverley C Pratt

Thank you Glenda and Baxter of Chesapeake, Virginia!

The Gold of Exodus – Howard Blum

The Sum of All Fears – Tom Clancy

How Did You Do It, Truett – S. Truett Cathy

Me My County My God – Dr. C Thomas Anderson and Don Enevoldsen

Run to the Roar – A Fable of Choice, Courage and Hope – J. Randy Forbes

How – Why HOW we do anything means everything – Dov Seidman

Thank you Linda and Richard of Alexandria, Virginia!

These are books we would like to have for the library.

We have just added a new video of Belle Grove Plantation on our Indiegogo site!

See what it is like driving up to this beautiful 221 year old Virginia Plantation!

Watch for “Dolley” our resident osprey to fly over the main house!

If you can, please consider contributing to our campaign to save these priceless treasures of American history!